Disneyland was fun. I went with my little boy Rocco. He turns three on Monday and he gets in free until then. I mentioned in a blog post a while back how he suddenly had imagination, and with imagination came the emotion of fear. Since then he's become afraid of tunnels, including overpasses that we drive under, as well as scary movies, loud noises, and similar things that agitate small children. Before this wondrous day of imagination, when he pretended for the first time, he was fearless. Disneyland was an experiment in pushing the boundaries of what he could handle with his new re-wired brain.

A three year old is restricted from a handful of rides based on height, but there are plenty of terrifying rides that are more subjective. I was trying to avoid them, and some were obvious. For example, some had "scary" in the title, like Snow White's Scary Adventure. Some I knew about from childhood, like Mr. Toad's Wild Ride or the Mad Hatter. I would often try to find a ride with other small children in line, but that failed miserably after a tearful experience with Pinnochio's Daring Journey. This was not the same child of six months before.

Disneyland in general is noisy and confusing, at least that's what I got from watching Rocco's face. It's not a place to have interesting conversations or bond with people, at least not through talking. We retreated to the far corners of the park and enjoyed more serene rides, like the Mark Twain Riverboat. This is a little boy just as excited over ducks in the water as an Indian camp. The Storyland Canal Boat ride was our baseline for fun and fear. This is the meandering boat ride that starts by going into the whale's mouth (Monstro) from Pinocchio. It wasn't a good sign, having come from a traumatic Pinocchio experience. There was apprehension at the scary mouth, but the other kids were fine with it, and he could see them in the daylight, so things went well. He was overjoyed at the miniature villages; I taught him well. If there was a ride that summed up his wonder and excitement, along with a baseline for what he could handle, it was this one.

At this point I stopped doing what I thought he wanted to do and just asked him. He's not much for talking, but I told him to point to where he wanted to go. This led us to the Monorail, popcorn, marching bands, a small petting zoo, and a toy store where he got a Ratatouille stuffed animal, as opposed to the mouse ears with his name on it that I would have bought him. We can save the mouse ears for a future trip. He was also happy to see the costumed performers, such as Buzz Lightyear, Woody and other Pixar luminaries, but he's not too familiar with classic Disney fare. The reason is simple: he watches DVD's, and the older DVD's aren't paced as well for very young children, unlike Pixar movies.

The nice thing about Disneyland, at least for Californians, is it doesn't have to be a once in a lifetime experience. We'll likely go back several more times as he grows older, and each time should be a different experience. I just hope he's still interested when he's old enough to go on the scary rides! 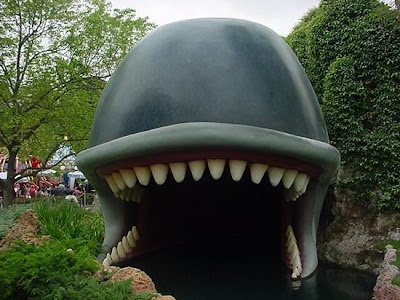