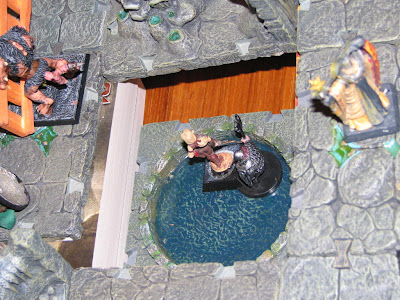 Watery Pit: Gavele Fevermind, the tiefling rogue who ambushed the party earlier, retreated to this room to alert the rat brutes of the parties presence. She directed them in combat until she fell to the sorcerers sword as she made a desperate leap across the pit. The sorcerer had been thrown into the pit as he entered the room, feather falled, and then used a potion of gaseous form to get back up later on. Ogden the dwarf watch captain was also thrown in the pit and spent the entire combat attempting not to drown in his heavy plate armor. As the sorcerer struggled to grab the ladder down below, one of the ratmen grabbed a struggling bundle, tied up in a blanket, and hurled it down the pit at him. This turned out to be Danekas, a female rogue that was captured by the cultists (played by Heather, our new player). Danekas was decisive at the end of the battle as she pierced the last ratbrute with an arrow through the neck, saving the faerie cleric. 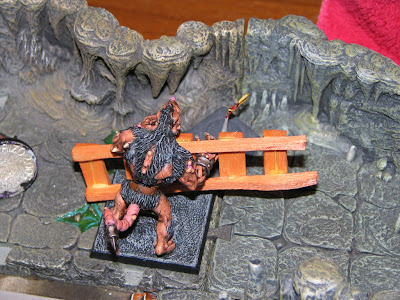 Improvise. With the part attempting to shoot at the ratbrute from across the pit, the brute yanked a part of the ladder away from the pit and started wailing on them. The nobleman, Emrick, took the brunt of the blows as the ratbrute used the ladder to extend his reach. Meanwhile, the party dealt with the second ratbrute, chasing him down as he fled. In this photo, the ratbrute turns the ladder on the faerie cleric, Vivia. Danekas is climbing up the pit behind it and is about to kill the nasty thing. 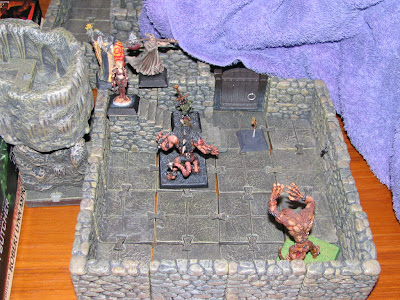 More ratbrutes. The ratbrutes bottleneck the party on the stairs. Danekas's new bow that she took from the dead tiefling begins to whisper to her that the brute in the corner is the stronger one. She alerts Viva who casts a spell on it, taking it out of the combat while it vomits uncontrollably in the corner. The combat is soon over. 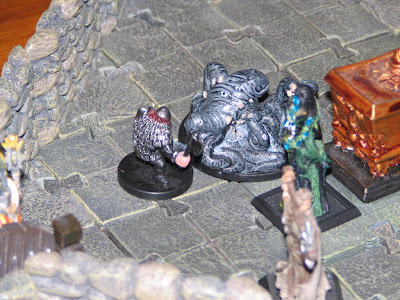 Chaos Sanctuary. The chaos sanctuary, with its strange symbols on the wall and pulsating sepulcher, houses a chaos beast. When the sepulcher is disturbed, the chaos beast oozes out of its home and begins attacking. Ogden is struck by it and immediately falls to the floor, his body a puddle of its former self. His wracked face can be seen in the goo, yelling for the party to kill him. The chaos beast is eventually slain, and Ogden momentarily returns to his original dwarf form, but only for a minute! The party urges him into the sepulcher; he was acting a little hostile towards them in his chaos form. Ogden agrees and faerie rushes to the surface, flying at top speed, so she can pick up a scroll to save Ogden's life. Ogden loses control while in the sepulcher and almost forgets who he is! He's saved at the very last second with a scroll of Restoration. 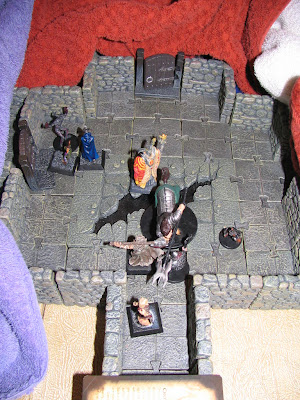 Demons! A Babau demon and a half-demon centaur lie in ambush, but Danekas figures out their ruse a moment before they attack and avoids getting skewered. The party isn't fighting rats anymore! These two creatures frustrate the party with their partial immunities to magic, weapons and most energy types. It was anything but a straightforward fight, but the party wears them down. The babau is treacherous, and attempts unsuccessfully to gate in another demon. He also tries to separate the party with magical darkness. He teleports behind the party to split them up, which works until they can regroup. The babau keeps telling them that they'll never penetrate the temple. He has a sinister, self-important laugh, and he tells the party that he is the decider, and he has decided that they will not live through this combat! He sidesteps them and casts one last desperate spell, but a lucky blow from a party member ruins it and he's dispatched, falling into the crevasse in the center of the room, never to decide again.
Posted by Gary Ray at Monday, March 24, 2008