I played Pizza Box Baseball today with Erik Smith of On The Line, the company that makes the game. I'm not a big fan of Pizza Box Football, I just don't like football, but Pizza Box Baseball seemed like it really worked for me. I grew up with baseball and little league and although I'm a sucky player, it's part of my upbringing.

Starting our game, Erik showed me the various levels of play. At its simplest level, you choose your pitches and your opponent decides to swing or choose a take card to get an advantage. You resolve by comparing results and picking from one of three stacks of cards, determined by the combination of pitch and batter action. For example, in the card below, the Hitter Advantage result in the basic game is a Fly Out. If you had runners on second and third base, they would advance one base (the +1). Pretty simple. 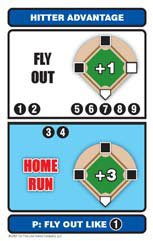 Those same cards, have a lot more on them, however. If you play a slightly more advanced version, your batting order begins to matter, as does your pitcher, who now gets tired as the innings move along. How long will you wait to replace him? There's even a closer pitcher who works miracles in the 9th inning.

Using the advanced rules, say your cleanup hitter, number four in the order, is up. You know this guy has the odds in his favor and the bases are loaded, so you swing for the fences and wham! Home run! That's denoted by the black circle with the number four in the bottom section of the card. If your pitcher was at bat, he would have sucked and gotten a pop fly. Not detailed enough? There are rules for pinch hitters, fielders choice, stealing bases, bunts, you name it. I'm sure there will be team expansions like in Pizza Box Football, so you can use real world players.

We played a full nine inning game in about forty-five minutes. I lost in the ninth inning, five to three, but I had fun, and that's what counts, or at least that's what they told us in little league. What struck me while playing Pizza Box Baseball was how its underlying complexity didn't slow down the game. While playing in basic mode, the additional rules on the card didn't get in the way. It also struck me as a great game for family members that don't normally play board games. In this case, I though it would be a great game for my father, who grew up with Strat-o-Matic sports games.

The cards are good quality, standard sized and plastic coated. The board is a laminated cardboard and has the option of folding it to show less, such as only the field of play. This is a great space saver if you don't need a template for placing cards. You've essentially got a travel version in this configuration. The little plastic pegs tended to fall out of the board sometimes, but that was a minor thing. Erik tells me there's a Junior version in the works too, although we discussed that kids younger than 10, the recommended age, shouldn't have trouble playing. 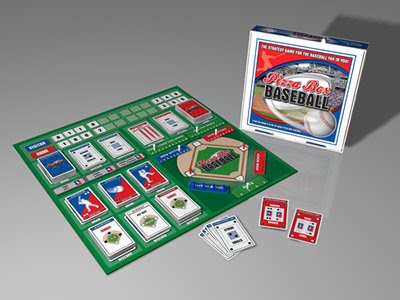