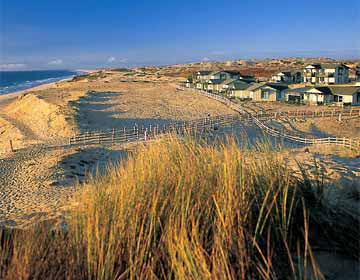 The weekend has been great here in Monterey. The weather ranged from beautiful and bright to stormy, and even a mini sandstorm on Saturday. I visited Monterey and Carmel, but I mostly read, watched movies and even television. I haven't had TV service at home in about a year and a half so I was happy to see I wasn't missing much. The writers strike seems to have changed things, with many more reality TV shows, lots of news panel shows, and plenty of re-runs. Boring! Except for the Japanese obstacle course shows on G4, there wasn't much of interest.

After the first day I looked around and wondered what I could do here that I couldn't do at home. After all, I'm just reading and watching movies, right? It was the change of setting, I think, knowing that there was nothing here but what I brought. There was no opportunity to work on the house (yeah right), run errands, call friends over, just the fun things I brought. It's forced vacation. I would never spend the $1000 that this room would cost for the weekend, but with a couple hundred thousand frequent flyer miles, it barely put a dent in my account.

The most excitement was from discovering a new book. Phoenicians, by Sanford Holst, is a fascinating look at a secretive culture that perfected commerce, brought us the written word, and disappeared almost without a trace, leaving only legends and shadowy references in Greek literature. The most important rule in Phoenician culture? We don't talk about Phoenician culture! They didn't disappear without a trace by chance, with a culture of non-confrontation and with no army (a waste of resources), they survived on their diplomacy and secrecy. If you're interested, I've discussed a lot of this stuff in posts over the weekend in my D&D 4 campaign blog.

D&D 4 Update. As for D&D 4 itself, I've completely lost interest in looking at it since the D&D experience de-briefing reports. I think we know enough now and I'm eagerly awaiting the books. Enworld readers are now in the process of dissecting what few rules we know, probably about 10%. Personally, the feedback from the event has made me less willing to fully commit to 4.o. I think that's natural. What we've had before independent play was a series of exciting hints, previews, and design theories on 4.0. Now that we can listen to people who have actually played, who have no stake in the company, there are now pros and cons, like everything else. There are many positive elements to 4.0, but I've see a few cons that make me hesitate slightly.

My main concern are the game mechanics that feel too "gamey," that take you out of the role-playing and turn it into a tactical miniature game. Things like "marking" and "shifting" opponents for example. I've announced to my D&D group that we'll try 4.0 for six months and if it isn't working out, we'll go back to 3.5, or more likely, the Book of Experimental Might by Monte Cook. Don't get my wrong, I'm moving forward with 4.0, full steam, but it's up to each group to decide if it's right for them.
Posted by Gary Ray at Monday, March 17, 2008