Several people have mentioned they thought my 40K army lacked enough contrast, and have suggested that I paint my bases a different color. First, I wanted to point out that I did shamelessly copy the GW painting scheme, as I lack a good sense of color and contrast. Nevertheless, I can agree that the models lack contrast and all you see is red.

Here are some paint scheme options for the bases. On the far right we've got the standard terracotta base. I admit it's awfully red. In the middle is Calthan Brown, which I think contrasts the red nicely and matches the brown details on the model. On the far left is a terracotta base with Khemri Brown drybrushed over it. It provides some contrast without changing the color too radically. It's subtle. 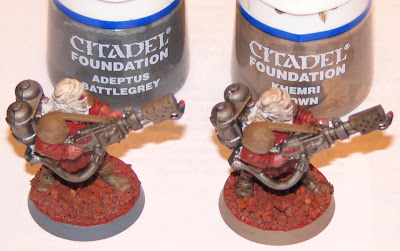 On the left here is Adeptus Battlegrey. Although it makes a stark contrast on my camo vehicles, I think it's too jarring on the men. The only grey on the model is their canteens, on their backs. Khemri Brown is on the right. It works alright, but it doesn't match the model details like Calthan Brown. I was originally basecoating with Calthan Brown and then using a standard Citadel paint over it, but I soon realized that my Devlan Mud wash was turning it very close to Calthan Brown, so I learned to save time by skipping the second coat of paint.

The flash photography highlights this far more than you would notice at the table. Check out the top photo for the practical differences.

What do you think? In the spirit of the election season, please vote on the right side of the page.
Posted by Gary Ray at Monday, August 25, 2008