The One Dollar Coke

Cost of Goods: $.22
This is the cost per can of Coke at good old Costco.

Delivery Cost: $.10
This is the cost of an employees time (almost always me unpaid) to go fetch the Coke. It's based on the average amount that I can fit in my car in one trip, divided by $10/hour. It would probably be about $.30 if it was delivered by a service, provided they would agree to do so.

Mileage: $.02
This is the miles to Costco, multiplied by the IRS 2008 mileage allowance, divided by the average load of soft drinks. I don't claim this, but I probably should.

Electricity: $.02
You want that cold? This is an estimate of electricity for the commercial cooler, divided by the number of drinks we sell each month (about 1000).

Sales Tax: $.08
Arnold needs his cut. Carbonated beverages are taxed. We're really selling Coke's for $.92 with the tax bringing it up to an even dollar.

Bottom line?
Our gross profit margin on a can of Coke is 49%, about average for our store. We're not trying to make our drinks a major profit center, like movie theaters that rely on concession sales to pay their bills. A movie theater medium drink is around $2.50. We're just trying to provide another product in exchange for a reasonable profit. 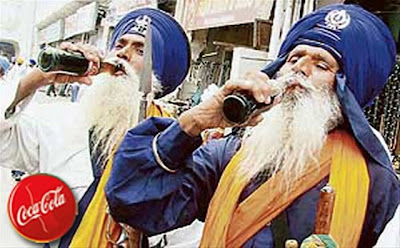