It's the week of Gencon, the big, national, end-all be-all of game conventions. In past years customers have made the long trip to Indianapolis, returning with cool pre-release stuff from game manufacturers. I'll learn who made that trip next week, but nobody has talked about it. I've lost sales from Gencon in the past, but I think this one will have a minimal effect on us. The subtext is that people are spending less money right now.

Stores within a wide radius of Indianapolis have a tough time during this period, with all the gamer dollars sucked out of their towns and dumped in Indy. Worse, since many items are sold early at Gencon, future product sales are impacted negatively. I've had this experience, as I announce the arrival of some shiny new release, only to learn that the local gaming group acquired it from Gencon, or indirectly from Gencon via Ebay. Some claim that it has an overall positive effect, as the Midwestern gaming community seems more vibrant than the rest of the country. The effect on us is usually more subtle.

Game companies are the root of the problem. All but the biggest are small and understaffed, meaning Gencon week is a kind of week off. Distributor stock is low, with lots of items unavailable, either because manufacturers aren't shipping while they're gone or preparing, or worse, because they brought it to Gencon. Some, like Playroom Entertainment have great new releases, while their core product remains out-of-print. Manufacturers are getting better at this, but it's an obvious issue this week.

Another issue for us is product glut. I swear, you could sell me anything remotely interesting in January or February, when game companies are practically dormant and customers are looking for something new. In mid-August, the releases are fast and furious, and overwhelming. I put together a $200 order yesterday for my primary distributor that quickly blossomed to $650 with all the new releases, and that was pushing some things out to later in the week. My purchasing budget is a couple thousand dollars in deficit, but as long as the sales are strong, I'll keep bringing in the new stuff. This is obvious product glut, and it's not rational.

The decent product competes and loses to the good product. There are only so many gamer dollars out there, so a product that could have been successful in March, is a loser in August. Also, this is the end of Summer, not the beginning. My big selling season is winding down, so a lot of Gencon released product, coming out in the next couple of weeks, will be introduced to a dwindling customer base as people resume their normal lives, going back to school or work. The product languishes and slowly sells off through the Fall, and hopefully there's still buzz for the holidays. This makes Fall bearable, as new product drives sales, but the timing just seems wrong to me. 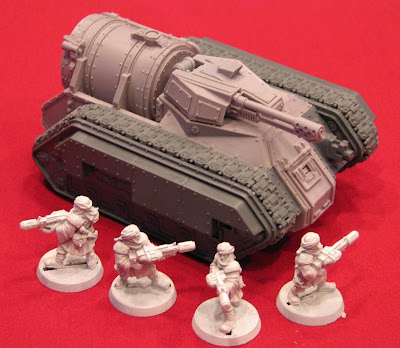 My current 40K project. The Artemia pattern hellhound arrived yesterday from Forge World, so that got put together. My dislike of resin grows, as pieces need to be carefully trimmed or heated to fit. I also have four Tallarn meltagunners for my command squad. One complaint: The only way to get these models is in a special weapons pack with the dreaded grenade launchers. I now have 10 extra launcher models. After these are painted, I get to work on the Hellhammers!
Posted by Gary Ray at Wednesday, August 13, 2008