We've had a phenomenal third quarter, punctuated with some amazing products, like Space Hulk and Magic 2010. September is usually a back-to-school month, but this year we saw the Summer momentum continue. Board games and collectible card games both saw double the sales of last September. The credit goes to our well oiled machine of volunteers who keep board game night, Friday Night Magic and Yu-Gi-Oh on track. It's the volunteers and the events they run, week in and week out, that have proven invaluable for us. The store really couldn't function without them.

Sales for the year remain very strong as well, up 10% from 2008. With all my bellyaching and theorizing about doom and gloom, it's almost embarrassing. It makes me wish I had spent more time reading game books rather than trying to divine the economy. What a lot of stress I caused myself! I have to say I'm also optimistic for the rest of the year, driven by some hot games in the pipeline, including Magic Zendikar, which released today. One of the more perplexing questions we were asking this week, while walking around the store, was which board games would be the big hits this year. We're still scratching our heads, as most of the big hits have been expansions or have been out since Fall of last year. Board games are on fire, but usually you can pinpoint the source of the heat.

The 2009 mindset is definitely different from 2008 when it comes to sales. 2009 is when we rolled up our sleeves and focused on the basics. This motivation came from pure fear, which turned out to be useful when directed creatively. Before this year, I still felt we were this little boutique store, with quaint interests that happened to propel us forward. We had ideas about what we wanted to be, and attempted, sometimes in vain, to mold the store in that image. This year we took time off from expansion and big projects and tried to truly serve our local market. This might sound obvious, but I think most store owners, deep down, form a vision (or not) that includes just the games they want to, or have to sell, rather than serving their base. I don't think we fully served our base until this year, when we got down to brass tacks. My new loves, forged in 2009 is serving customer niches and paying off debt. You can actually feel it in the air when you're fully committed in this way. It's like a well oiled machine. Previous years seem as alien as dot-com companies I used to work for.

This service mindset doesn't mean making stupid decisions to please customers, like excess inventory. It means really listening and serving markets regardless of personal feelings. It's about building markets that didn't exist before, as opposed to shuffling existing customers from one game to another. Our collectible card market was an obvious example, with sales of single cards being very successful, and still growing. Serving the D&D 3.5 market turned out to be important, even though that version is out of print. Buying used books and re-selling allowed us to stock that game again. Stocking Games Workshop bits and Forge World items is something we've recently developed to serve the 40K crowd, although I admit it's fun and sexy.

Until this year, I've never felt the need to delve down to this level of customer need. There was always someone else to do that. I want to be that someone else! If you pay attention to business media, there has been a return to fundamentals that promote this kind of behavior and it gives me faith in the American economy. I have to think other business people are doing the same. 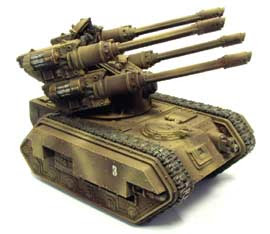 Forge World Hydra Kit. This is the hottest artillery piece in the new Imperial Guard codex, but it's only available from Forge World. We've got them on order.
Posted by Gary Ray at Friday, October 02, 2009