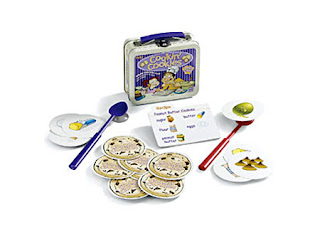 My four year old Rocco is not a big game player. He loves to play with his Hot Wheels and just recently got into Legos. When we introduce him to games for kids his age, he usually loses interest quickly. Maybe that's because we don't play a lot of board games at the house. He'll sit still for an hour with me to paint a miniature or narrate his own Dungeons & Dragons game, but when it comes to board and card games, he'll just mess around and play with the pieces.

Recently he started taking a cooking class and brought home some cookies. Like many small children, he thinks cooking is an amazing thing. I know theme can go a long way in keeping someone interested in a game, so I picked up Cookin' Cookies for him. This little Fundex game comes in a small lunch box tin. For $10, you get eight recipe cards, twenty six ingredient cards, and four plastic spoons with suction cups. This is like a super easy version of the game Wasabi!  The game has been around for six years, but one of my game distributors, ACD, just started carrying it last week. Cookin' Cookies is for ages 4+.

Cookin' Cookies has recipe cards requiring five ingredients. The ingredient cards are placed face down and you take turns picking them up with your suction cupped spoon. When you get an ingredient you need, you put it next to your recipe card. When you get a different ingredient, you put it back. If you get the rotten egg card, your batch is ruined and you put all your ingredients back and start over. Whoever finishes their recipe first is the winner. Some games took just a few minutes, while a few went on for quite a while, with the rotten egg starting each of us back to the beginning. That might sound tedious, but a rotten egg card was a hilarious spoiler, especially when I drew it.

Rocco absolutely loves this game. The whacking with a spoon is obviously fun and the concept of recipes and ingredients is something most small children are familiar with and find fascinating. There was a little confusion with the "first flavor" ingredient, a wild card. It wasn't in the rules but it was easy to reason out. For Rocco, mastering this game was an important milestone, being the first time he's played multiple sessions and understanding concepts like player turns, game completion and fully following rules. Kids mature at different rates, and I'm glad to see we're finally at this level. We'll have many more games ahead of us.

The down side to this game are the materials. The cards are plastic coated and should hold up well enough, but the plastic spoons are trouble. One of our four spoons had a bad suction cup right out of the box. Rocco broke two other spoons messing around with them (he hid them under his bed, so he wouldn't get in trouble). Rather than a simple, push in suction cup, the spoons have a small pin that affixes the suction cup to the plastic. I've read about other parents having the same problem. Even with broken spoons, Rocco was happy to play the game by picking up the cards with his hands. The spoons are a cool gimmick, but not essential. 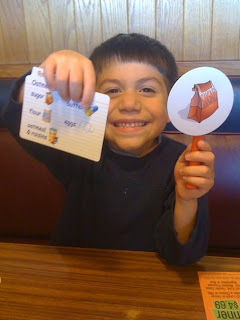