It all went horribly wrong..... The Eldar, sensing the potential devastation of the Imperial Guard artillery, sacrificed their own transport ships by crashing them out of orbit into the defender's base. There was no turning back now. The first spaceship took out the voidshield on the skyshield landing pad, under which hid four Basilisk artillery vehicles and a Hellhound flame tank. The second space craft smashed the undefended skyshield to bits, raining down rubble onto the vehicles hiding beneath it. The third and fourth space craft rained down nearby, destroying three of the four Basilisks and destroying the weapons on the Hellhound and the main guns on the two Leman Russ Executioners. Two squads of guardsmen and their commander were squashed as well. Only a single Basilisk remained fully functional out of seven vehicles, along with a handful of men. Then the fighting began.....

This was my first Planestrike game. I planned for it over the weekend and it was pretty much over before it began. Still, we made the best of it and decided not to play strategems for our next game. The "Crash and Burn" attacker strategem was overwhelmingly devastating, and a little disheartening after surviving the initial firestorm completely unscathed. We both knew the game had gone off the rails a bit after the attack, and this was before turn one. Below are some photos and a layout I made ahead of time. 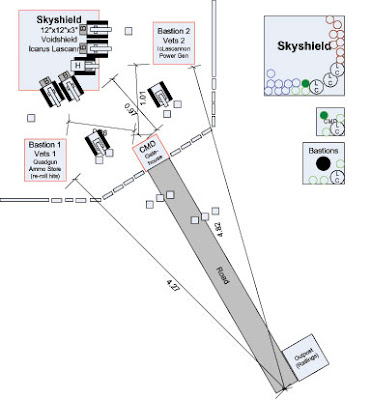 I used Visio to lay out roughly where things would go. The big decision was to use the height of the skyshield to hide a bunch of vehicles. Then by using the voidshield stategem, I protected them from the initial bombardment. Unfortunately, the "Crash and Burn" strategem ripped right through it. Other considerations: making sure my commander's building was within 12" of all the other buildings, so he could issue orders. Having lanes of fire for all the main guns. Reinforcing obvious targets with overwhelming firepower. 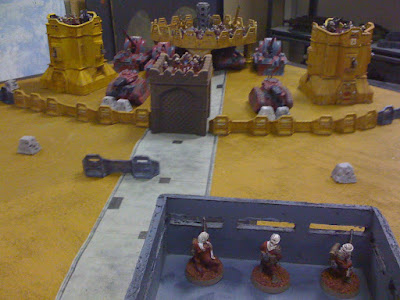 Sniper eye view. These guys worked great, sitting atop a non-objective building and harassing the Eldar. They took out about five guys during the game, earning their keep. 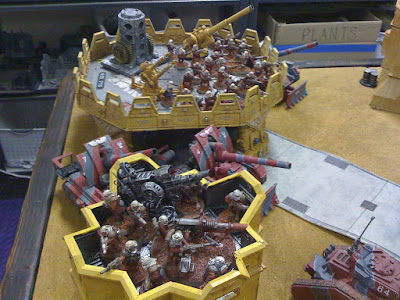 The men are actually inside the buildings, but they're left on top because they look cool. 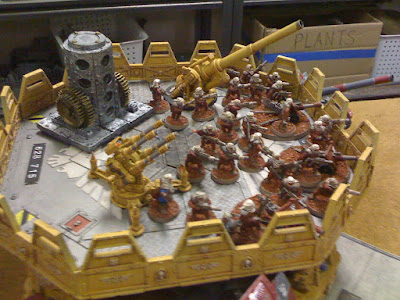 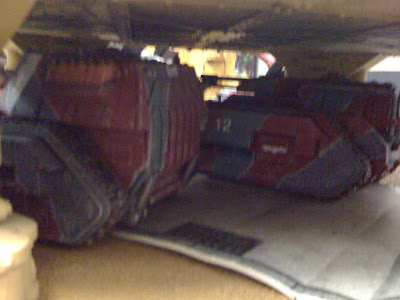 Vehicles hiding under the skyshield.
As the game began.... 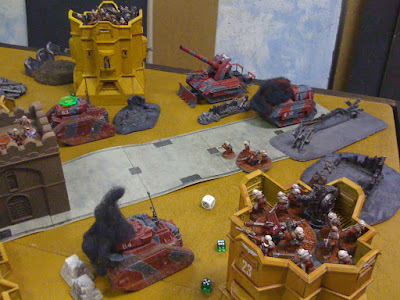 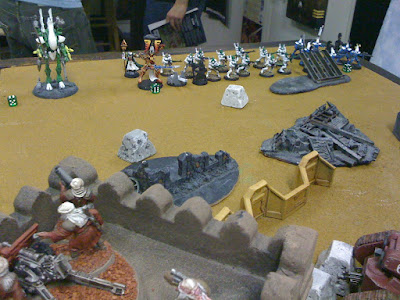 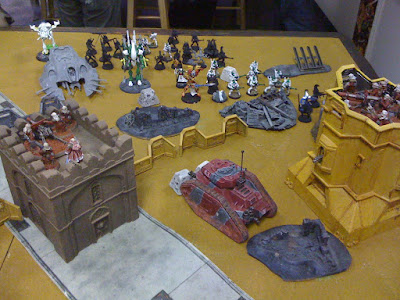 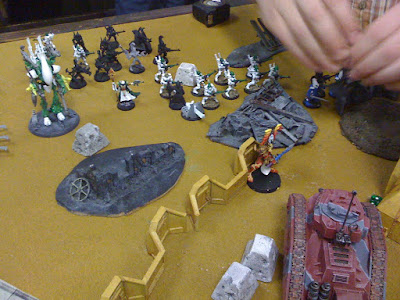 It became clear to me that the way things would normally work is the attacker would either focus on taking out my vehicles or taking out buildings. This Eldar army had many bright lances, but with my vehicles mostly neutralized, they could focus every turn on hitting buildings, usually resulting in "stunning" them into inactivity. The buildings were what was left of my firepower, so it was an effective strategy in neutralizing my army. The remaining basilisk was the most effective unit in the game, and as the no man's land filled up with Eldar, I was really wishing I had more of them left.

Thanks to Armando for a good game!
Posted by Gary Ray at Monday, October 19, 2009