With our big inventory project complete, we find ourselves with a higher turn rate than we originally estimated. It turns out our inventory was far more efficient than we first thought. Yes, this is a way to spin the fact that stuff is not where we put it. It's a little bit like saying, I can't find my keys but I've reduced clutter by not having them there. So with less inventory, efficiency goes up. However, you can be too efficient, and we're there.
When I talk about efficiency, I'm back on turn rates. Inventory, I believe, should turn four times a year. Not everything will turn at four, but a strong department, looking at the overall numbers, should average four. Some will be much higher. For example, our collectible card games turn at an astonishing 27. Some departments are naturally (this is debatable) a bit lower. Our classic games are at a depressing 1.5. Failing departments can be pruned (like our toys). I've talked plenty about "firing" under performing departments. But can you have over performing departments?
You can have turns that are too high. The CCG example of 27 is probably not one of these. There is no benefit to having more card inventory. There will be no additional sales by keeping extra boxes of cards around, just in case. CCGs naturally just turn high, which is why they're great for small shops. Bank on it and look elsewhere for trouble. An example for over performing inventory for me are card games. They turn at six. These are games like Five Crowns and Munchkin, non collectibles that a lot of stores lump into their board game section. The recession made them super popular, far more than board games, due to their excellent value.
Once you get beyond that peak threshold of four (some would argue three) turns, it's thought that your inventory is too lean. I'll often refer to inventory as the engine of my high performance race car. An engine that runs too lean is being starved of fuel. Without fuel, you don't get the power you need. The same is true with lean inventory. Yes, you're being efficient, but you're losing sales. In the case of my card games, I could fix this by expanding my inventory to bring it up to that four turn mark.
So if I had $40,000 in card game sales last year, it means I had $6,666 in inventory to get six turns. If I wanted to add some sales horsepower to my economic engine, I would add $3,334 in card inventory to the mix. That's the budget to get four turns ($6,666 + $3,334 = $10,000 or 1/4th of $40,000). Step one is making sure I'm not running out of my top card games. For example, we keep three copies of Munchkin in stock, a safe number that almost always gets us through to our next order cycle.  After my evergreen best sellers are taken care of, I can expand my breadth of games. Perhaps I'll add more Steve Jackson Games or look for other clues to what people want (asking can be helpful). When new games are released, I might add more than usual and I might be more forgiving on slower turning games within the department.

This all assumes the store is in good shape and there aren't more important fires to put out. However, it doesn't require that you be profitable or even have money. You can easily come up with that $3,334 by looking at the bottom of your turn numbers. Take my 1.5 turn classic games, for example. Assuming that I don't just accept that classic games turn poorly, I have too much inventory in that area. As much as I try to offer up a variety of classic games, the local community just doesn't want them. That's a department, that if I were brutally honest, could be cut in half, at least, the money shifted to my growing card game section. I've increased my sales with my resources on hand. Magic.
From what I gather, big box stores do this kind of math all the time. Sophisticated open to buy programs, costing thousands of dollars, offer this kind of granular balancing for your point-of-sale machine. Shifting inventory is very difficult, both in strategy and tactics. Worse, as a game store owner, I probably have a stake or at least an interest in one department over another. It's my perception that I need classic games, or that role-playing is critical to my store. This will often drive my purchasing decisions. It takes a true business person to say enough. You have your share. You have to stick to a budget despite all the shiny new releases. 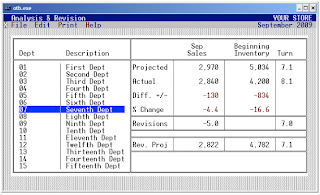