If you are an alpha gamer, if you read blogs about games (or write one), participate in discussion forums, and attend game store events, or if you're new to the game trade, you should know about the strange terms the game industry uses to release new product.

Most of the 20,000 items we stock (compared to 4,000 at Costco) just show up when we order them. There are no street dates or release dates, thankfully. There just isn't need for fanfare for the vast majority of games out there. When a company does try to create excitement with a date when there is none, it's usually met with eye rolling and sarcasm from the buyers and sales reps out there. There is coordination that must go into timed releases, especially if you try to run a top store that gets everything on the street date (like ours). At the same time, some companies need dates but don't have them. For example, it looks like Fantasy Flight Games, the release date joke at our store, will soon have street dates for some of their new releases. Some games, including most of the FFG line, very much need a street date. Take that as a compliment FFG.

Fans of the hottest games rabidly await releases, and street dates help us manage the process. It gets product in early so we're not telling a dozen people the average arrival time of UPS. It ensures that competing stores won't take our sales because their UPS delivery arrives at 10am and ours arrives at 2pm. This happens. Street dates cut one way unfortunately. A Wal Mart that sells Magic early will get a finger waggle from Wizards of the Coast, while my WOTC account, and thus my entire business, would be in jeopardy if I broke the date.


Some retailers really don't like street dates. Their attitude is that they've already been billed for the product, therefore it is theirs to do with as they please. Sometimes this can be justified, such as when a company ships product a week or more before the street date. The clock is ticking on that invoice and you're sitting on your hands. Fair competition is the main driver for maintaining and enforcement of street dates, so if a product has no competitors within your region, it becomes mostly a formality. The question: Would anyone complain if this was sold early? Some games, like Magic, have such rigid street dates with clear penalties and strong local competition that you would be risking your business to sell product early. Meanwhile, Games Workshop has street dates, but in most cases encourages us to sell stuff when it shows up.
There is some confusion about street dates and release dates. The street date is the day on which an item can "hit the street" or be sold in a store or arrive at your door, if you bought online. Then there are release dates. The release date is when an item can be shipped to the store or customer. Clearly a street date is a firm time in which you will get something in hand, while a release date is fuzzier.
There are very hard street dates and somewhat soft street dates. If the game has a street date of Friday and I'm a two day ship from the distributor, ideally it will get shipped on Tuesday to arrive Thursday for a Friday street date. A more rigid company might not approve of that, so they'll allow it to be shipped Wednesday for Friday arrival, which is bad for those with late UPS times. Wizards of the Coast is actually the most flexible on this, probably because breaking the dates are considered serious, so they may get product two days earlier than the street date, in case something happens in shipping.
A release date with no street date is very fuzzy, and there are lots of these. A release date is a shipping date to retailers. So if a game has a release date of Monday, it will probably arrive to me, with next day delivery, on Tuesday. It would arrive to a two day ship store on Wednesday. Some stores only order once or twice a week, so it may just show up whenever that day is. In some industries, release date and street date mean the same thing, but not in the game trade.  Many people get this confused, even those in the industry. 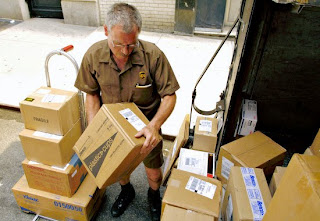