I've been thinking more about how running a business in a recession changed my thinking. It has been a good thing for me, really. It transitioned my thinking from gentleman farmer, dabbling in retail with one foot in the IT world, to true retailer, examining the nuts and bolts of our operation. It has moved my from a gross footing to a net footing. There is definitely some high concept strategy in running a small business. It's required to be successful, but the recession taught me that executing that vision requires strong tactics, especially in cost controls.

If you define yourself as a strategy guy, tactics can seem beneath you. You can outrun your boring "tactical" expenses with your brilliant "strategic" income growth. The recession made frugality fashionable. Everyone was doing it. As sales began to slip when customers began losing their job, society (the press, friends, etc.) reminded us all to focus on costs. Nothing was sacred any longer.

Our fancy, logo printed bags were dumped. The term "merchandising expense" was stricken from my vocabulary; usually used as an excuse for overspending on displays or under performing muggle product. It became clear to me that after five years, the community had shown their demand and I would no longer attempt to supply them with what I thought they should buy. Some games were simply outliving their demographic, as harsh as that sounds. I still fret over the thermostat temperature, battling with the evening staff who have to deal with skyrocketing heat in the game center. You could probably create a temperature formula based on the event attendance and demographic (AKA girth). We buy all of our office and cleaning supplies in bulk now. However, the biggest savings came from the marketing budget.

One of the big assumptions I made when I started my business was from a book I read on retailing (I read most of them). It postulated that retail stores should spend 3-5% of their gross sales on marketing. That's exactly what I did, spending tens of thousands of dollars over the years on TV, radio, print, direct mail, movie theater ads, you name it. No doubt it brought in customers, but the expense always seemed rather high and the results inconclusive. When the stock market crashed and we experienced a big drop in sales, I stopped our traditional marketing out of survival. I was always told you could coast for a few months without advertising before sales lagged. Then I asked the important cost cutting question, what if I just didn't spend that money? What would happen? What if I could extend that few month lag to six months?

What happened was nothing. Or more accurately, when we stopped advertising, our sales actually went up a little. Over the following year, it was clear that traditional advertising had little bearing on our success. Nobody watched TV, and when they did, the medium was so scattered that you rarely hit your audience. The year before the recession, everyone was advertising heavily in the Yellow Pages; that stopped cold. What was increasingly driving customers to our store was social media marketing and word of mouth. Our customer emails, Facebook, Twitter, and the occasional guerrilla marketing campaign were working wonders. Despite naysayers, we're now learning that social media marketing targets both your base and new customers. This is hugely important.

Since then, I've decided to focus our marketing entirely in the social media arena. I'm definitely trading my time for my money, but the savings are tremendous. It's often the difference each month between losing money and making money. 3-5% of my gross sales, the amount I was spending on traditional marketing, is a huge increase to your bottom line in a trade where 7-10% is the usual profit margin. The media website Vitrue tells me my time spent marketing on Facebook is worth over $500/month. None of this would have happened without the recession driving cost cutting measures. You would think everyone would want to do it? Facebook advertising is up 400% in the last year, but there are many who still shy away.

When the dust finally clears, small businesses that survived the recession will be stronger. If they ran profitable businesses before the recession, they'll do even better now. If they were marginal, my guess is they'll be much stronger in the future. For me it has been about fully engaging in every aspect of my business. It has been about questioning every assumption and focusing first on customer service. If it doesn't serve my customers and it doesn't make me money, I don't do it. Most importantly, it has been about listening to my customers.

P.S.: We increased our store hours by 5% during this period, adding staff. 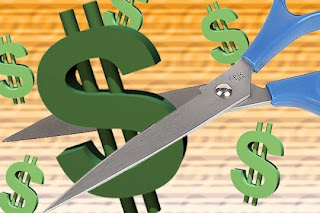