Yesterday I attempted to go to my usual Barnes & Noble store in Richmond, but discovered it was out of business. This store, along with a closed store in Jack London Square in Oakland, were occasional weekend destinations for me and my family, especially when shopping for my five year old. I prefer independent bookstores (and despise Amazon) but there are few left.

Where once you could casually wander through bookstores on almost any shopping trip, book stores are now destination stores, requiring planning, much like a game store. That my Richmond store blamed the closing of the nearby Circuit City for a fall in foot traffic and their eventual closing, shows that regular foot traffic must have been a big part of their business and that they're far more susceptible to a bad economy than destination stores like ours. Thus, the 25,000 square foot space, which now seems insanely optimistic, is on the market. That it closed four months ago and I hadn't noticed shows that I've cut back dramatically on my book store purchases.

My next destination was the El Cerrito Barnes & Noble store, where customers were sparse, a burly security guard stood in the entryway like a bored gladiator, and the idle staff congregated in the center of the store. In this center area were a bunch of mostly empty silver shelves. Some were stacked with some tired board game titles. However, what caught my eye were the various planogram documents taped to the shelves, awaiting product. A planogram is a kind of map that tells you exactly where to shelve products. The games on the planogram sheet were anything but tired.

These were serious hobby games, the cream of the crop. Usually about ten percent of B&N board game offerings have any cross over whatsoever, but the planogram showed most of our top sellers. Settlers and expansions, Carcassonne, Dominion, Ticket to Ride, various flavors of Munchkin, Pandemic and even the new Forbidden Island and the SdJ nominee (and presumed winner for months now) Fresco. Someone with a lot of game industry sales knowledge (or a distributor - I wonder who?) did their homework. The Days of Wonder and Gamewright games provide an easy hint. 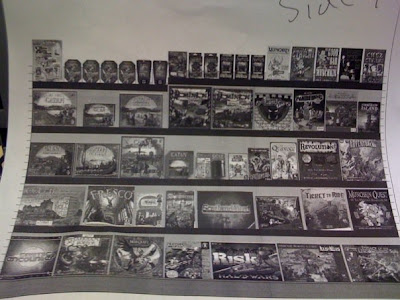 
I have to admit being a bit shocked and appalled. Usually when a hobby game hits mass market, it means the decline or death of that game for us. Our sales plummet, turn rates go from stratospheric to average, and we generally stop pushing that game. Games like Apples to Apples, Cranium and Blokus used to require multiple case ordering for the holidays, but now get treated like the red headed stepchild, both because mass has tarnished it and taken customers and the margins are usually turned into mass market low profit items. The game trade often sees itself as the stepping stone or test market for games that eventually go mass, and eventually get dumped when they fail to meet mass markets high turn rate requirements.

I could go on a tirade about the potential threat of mass market to these publishers and to us, but the threat is just not there. Barnes & Noble and the mass market book store are no Target or Wal-Mart. This smells of a desperate attempt at relevance and capturing sales through diversification. It's the wrong move. I dumped my book purchases on the closest shelf and left the store. I'll be buying my books online from now on, although I hope I can find an alternative to Amazon.
Posted by Gary Ray at Sunday, June 13, 2010