The Stages of Inventory

Inventory seems like an obvious task for a retailer. However, it's horribly time consuming so it's often put off. A full and thorough store inventory, taking everything off the shelves, scanning it and returning it, will take us about 16 man days of time, an expense that may be higher than the losses. We could move the entire store faster. We're in the process of doing this now. Usually we do spot inventories of a particular product line or perhaps an entire department a couple times a year. There's an emotional toll to inventory that seemes peculiarly like grieving. There is loss. Granted, it's nothing like losing a loved one, but it's probably bigger than you expected. Here's the grieving process applied to the inventory process with some exaggeration added for emphasis:

Shock and Denial. Denial is what kept you from doing inventory for so long. It seems mostly right on a daily basis. How bad could it be? When it's eventually done, the shocking truth of inventory losses is hard to swallow. The longer you wait, the worse the denial, the more shock experienced. Where did it all go? There's an accepted industry shrinkage of 2-5% of your cost of goods, but any loss is hard to bear. This 2-5% includes shoplifting, but it also includes items that weren't received properly, weren't sold properly or that had to be disposed of because of shelf wear. If you're in hard core denial, you may believe that most of your losses are mistakes not related to theft. They're procedural errors and thus that stuff never really existed. This isn't happening! That your customer base could be so callous as to steal from you and you family is simply impossible. Silly computer, you lie.

Pain and Guilt. You should have done inventory sooner. How will you explain this to your investors, your spouse, your employees? Why didn't you hire more staff to keep an eye on the store? Why didn't you aim your cameras in the right direction or invest in an inventory control system? You suck as a retailer. You're just playing at retail, while your peers would never have let this happen. You want to forget about this and throw yourself into your miniature painting, making that next character, or building the killer deck, but you know it won't solve the problem.

Anger and Bargaining. That stuff was gone anyway, a formal inventory was just an acknowledgment of this fact. Nothing to see here, move along. If you had done your inventory sooner, it wouldn't have changed the fact that the stuff was missing. You probably lost sales because you thought you had that stuff, but heck, it's not like you had the money to replace it, right? You paid taxes on it too, but hey, the schools need teachers and the roads need paving, you were just doing your part. Consider it your charitable donation for the year. Not having product on the shelf serves the customers right. A theft of an item has a direct effect on the community that stole it, as your offerings in that range diminish. Screw those guys! Maybe if you just buy back the missing stuff you'll feel better about it.

Depression. Oh my God, there's thousands of dollars of stuff missing. That could have gone to your kids college fund. That's a vacation somewhere nice! Just when things were turning around with the economy, this. Everyone needs to just leave you alone. Spend some time in your office, contemplating your profession and the base nature of those who have robbed you blind. You can't believe how many hours your staff took to find this out or the hours you spent when you could have been at home with your family or playing games.

Upward Turn. You begin to think straight and everyone doesn't look like a crook anymore. Some missing items show up, possibly because they were miscounted or mis-categorized. You run a bunch of reports that show the damage wasn't quite as bad as initially thought. Questions to employees about missing items yield some logical explanations. The emotion of the situation begins to defuse as you apply your professional skills to the task at hand. You work through it.

Reconstruction. It's over now and after a careful analysis, most of the stuff wasn't worth re-ordering. Otherwise, customers would have brought it to your attention or you would have noticed. Sales should turn around in those areas with missing stock. Extra staff has been assigned busier periods to watch over the store and extra security was implemented to cover trouble spots. Staff will get some loss control training. You can handle this and the losses are built into the business model, after all. Remember that 2-5%? You'll have to put off some product expansion and new fixtures to pay for the missing merchandise.

Acceptance and Hope. You'll have to do this more often to lessen the pain. A bit of your faith in humanity has been removed from your soul. Perhaps it is gone forever.You generally know who stole what, based on the categories. You've got a short list of suspicious customers, perhaps based on rumor or gut instinct. You stop pretending and take precautions, such as putting product in display cases, increasing visibility, or simply drop product that can't be secured. This is a learning process which means you can get better at it, which should increase profitability. Your faith in humanity has been diminished, but you will be a better retailer for it. You focus on the future and the exciting releases coming up. 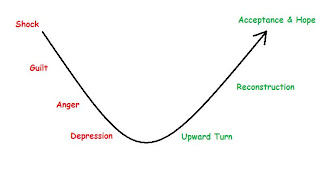