Although I usually reserve navel gazing for troubled times, it's often interesting to analyze success. The concern when things are going well is something important is being overlooked, something that will bite you when the tide turns. Now that we've just completed the first half of 2012, lets take a look at how the store is doing. Again, just one store in a galaxy of game stores.

The chart below shows our sales year to date, compared to 2011 YTD. So let's spin a narrative about what we see here. 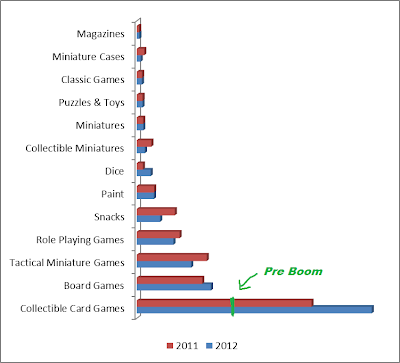 Most importantly, we remain in a CCG boom period, reflected in both years. It was hard to do a comparison like this with pre boom time sales, but now we can take a look. CCGs are still going strong and we're seeing competitors enter the market, hoping to slice off a piece of the pie.

There's Monsuno from Topps (a non-starter for us), Wizards of the Coast's Kaijudo, a Duel Masters resurrection (it's #2 in Japan) and Cardfight Vanguard, which stumbles along like a drunken kung-fu master, but seems to be gaining its footing with anime card game alpha gamers. There are others which we choose to completely ignore, but you get the picture. This is nothing like 2005, when we sold 34 different card games, all somewhat successfully, but competitors can sense this is where the money is once again, and as the economy improves, the market should theoretically grow.

The money in CCGs is good enough that dedicated card shops are appearing once again, often with owners that are looking to cash in quick with tiny retail spaces and huge game spaces. They know their days are numbered. The money in CCGs can not only hide a dysfunctional business model (the card shop), but it can also hide problems or shortcomings in other areas of the game trade.

Those shortcomings for us are rather large. Tactical miniature games have had difficult times in our store over the last 18 months, and I'm referring almost entirely to Warhammer 40K. When a monster like 40K runs into trouble, it's reflected in the numbers pretty clearly. Thankfully, the 40K release of 6th edition yesterday was moderately successful, despite a lot of grumbling.

There are highly anticipated releases of a game (3rd edition D&D, 5th edition 40K, etc.), then there are releases that fans grudgingly accept (or not), like this one. Is 6th edition 40K good? Perhaps, but this one will be a slow burn, hindered by a company that believes secrecy is a marketing plan.

Meanwhile, our Warmachine sales are very high for that game, akin to 40K actually (after all, it's where all the 40K players went), and we're investing heavily into Dropzone Commander arriving at the end of July.  We'll be carrying the full line by the second wave of releases and we're doing pre-orders for it now. For a while, we'll be the only store in Northern California with the full line in stock.

Also in the arena of shortcomings are role-playing games. Game Trade Magazine declared 2012 the Year of Pathfinder, but our big Pathfinder transition year was 2011. We're still getting a lot of new players and the core rulebook is the best seller, but we're ahead of the curve on this one, with Pathfinder already well established. Meanwhile, D&D languishes with mediocre releases of mostly accessories like tile sets and those confounded cards.

D&D Next does look rather good though, especially if they've truly ditched miniature grid based combat for more "theater of the mind." This is a strong differentiator from Pathfinder and 3.5 (which they're reprinting in August, by the way) and should appeal to those who thought D&D was at its height during 1st and 2nd edition. I expect next Summer we'll be talking about the blockbuster release of that game. The re-print of the three books for AD&D are still due out this month. Wizards of the Coast is throwing all their intellectual property against the wall to see what sticks, which is fine with me.

Everything else is more or less stable. The miniature cases are about last years change over to Battlefoam from Sabol. Collectible miniatures were about the tail end of WOTC D&D minis during the first half of 2011. You can see we haven't been as successful with Paizo minis, which haven't seen a booster release since January. Heroclix were a little bit more popular last year as well.

Overall, if it wasn't for collectible card games, we would be flat or up a point or two. That's good to know for when the CCG boom period eventually runs out. I've also noticed stores that generally despise CCGs and their crowd jump in whole heartedly, since the writing was on the wall. Wise move.

Analysis like this forces us to ask the tough questions. Are we paying enough attention to our role-playing games? Do we need to do a better job organizing 40K events? Do we need to improve our snack selection? These are questions you might not ask yourself if you were blinded by the success of cards.
Posted by Gary Ray at Sunday, July 01, 2012