We received and cataloged over 20 boxes of games yesterday, stuff that ranged in quality from pristine to forklift fodder. We also started taking in auction items from customers, with some real gems, especially out-of-print and hard to find board games like Monsters Menace America. It's shaping up to be a smaller, but very, very high quality auction.

Some highlights: Copies of 40K Apocalypse in perfect condition. A large assortment of AT-43, usually with one model in a box broken. A bunch of good quality copies of Stone Age. Pristine "coffin games" from Fantasy Flight like Tide of Iron, Starcraft and Descent. The new Age of Conan is well represented. The list is available to subscribers and on the email archives (to the right of this page).

Edit: A customer dropped off Magic cards for the auction for the first time today. Five neatly sorted bundles that each include at least 72 rares. The buy it now price is $40 each.

Sale Stuff: It's been a strange quarter when it comes to gauging product demand so we'll be using the auction as an overstock sale as well. Overstock D&D will be sold at half off, or in some cases, buy one, get one free. We're already selling Ork battleforce boxes for $55 while they last. These are products that are considered "evergreen" and never go on sale. Take advantage of the situation.

D&D 3.5 Update. I'm about ready to put the brakes on our buy-back program, but every new arrival brings in a few more gems. We're probably better stocked now than when the game was in print! 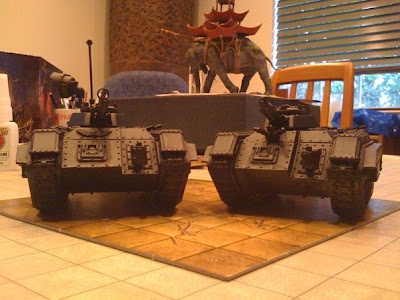 Modeling Update: The debate on priming yesterday was whether to go with a standard black primer or to use one of the new Army Painter primers, either gray or red. Andrey at the store swore that the Army Painter red primer was an exact match for the scab red of my vehicles. I wasn't so certain, so I chickened out and went with black. I'm planning to use the Games Workshop spray gun, so it's not like an extra step will cost me a lot of time.

Priming turned out to be difficult last night, with the paint too runny. I'm not sure why, it was around 74 degrees and fairly dry and I was using a fresh bottle of Testors (after an almost finished GW primer nozzle clogged). I was planning to try the new army painter black primer, which I brought home, but I discovered the little black Testors bottle hiding. I'm actually getting to the point where bottle priming isn't suiting my needs any more, since they're so unpredictable. I wonder if using chaos black in the spray gun would give more consistent results. Is it even suitable as a primer?