I started my gaming with the Dungeons & Dragons Basic Set. My particular version was the magenta box, received from Santa for Christmas. Soon it was supplemented by the early half-sized D&D books, including the one with the nude on the cover which my mother made me return to the store. It turns out the significance of the book in question, Eldritch Wizardry, was not sex, but the introduction of demons to the game. Those of us who played D&D in the 80's kept it on the down low, as it had a (quite attractive) aura of unwholesomeness. Thankfully those busybodies have moved on to harass video gamers. Good luck with that.

Eventually Advanced Dungeons & Dragons books made it onto my radar, along with the various modules (adventures) and other D&D paraphernalia. For the most part these were bought at the local cookware store. I would ride my bike to this store, back when children were allowed outside unaccompanied by adults. Cookware stores have a unique aroma, a coffee-like smell that to this day reminds me of my early gaming days. The modules also had a unique, printer ink smell, that I haven't smelled since. It was heaven. There was a tiny nook in the cookware store with one bookshelf containing my entire gaming universe. Eventually I would make it to the full game store (whose name escapes me) at South Coast Plaza in Orange County. It had a larger variety of games, but they were mostly war games and little chit and counter baggies from Steve Jackson Games and similar companies. Car Wars captured my imagination for about three days. Sorry.

D&D was my first love and most of my friends from junior high school and college were from playing the game. I lost friends too, such as when I intentionally played a character based around Damien, from The Omen, to annoy a Christian gamer friend. As a bit of trivia, he later became the bass player for No Doubt. I still keep in touch with most of those friends, along with my new friends, who not surprisingly, I either met through gaming as an adult or who were sucked into my gaming orbit for a time.

Besides D&D, we had other games we played in high school. Traveller was one that especially captured my imagination, but seemed nearly impossible to manage as a game master. There was the complexity, plus all the many books to buy. Still, I never had more fun playing a character, especially my lizard alien baron who had such an extreme metabolism that it required him to employ a servant to follow the party around with a shopping cart full of tuna cans. We tried Boot Hill, Gamma World and Star Frontiers, but they were diversions, and eventually it was back to D&D.

The one exception was Top Secret. A couple friends had world class adventures with NPCs to die for (literally). Our nemesis Taskmaster was always one step ahead of us in his tricked out Porsche 911. Our handler, Foster, with his state of the art jet and tasty popsicles, could arrive at any moment to whisk us around the world to stop some sort of villainy. The GM for that game eventually got a Top Secret article published in Dragon as well as an excellent article on character backgrounds. Remember, we were still in high school! Mostly I remember the tag lines, although the events that led up to them are only vaguely remembered. "Secret service, stay in your rooms!" Many of our characters were based on real-world spies or super-cops, while others were our desperate alter-egos.

These were some great role-playing sessions, but eventually it came back to Dungeons & Dragons. After we all went off to college, we tried to keep the old D&D group going, but it was a losing battle. I started my own gaming sessions in college. At this time it was the late 80's, and I was an Asian Studies major at San Diego State. I ran an AD&D Oriental Adventures campaign in a version of ancient Japan. Asian Studies was my passion at the time and a good adventure might involve a haiku competition or a major historical event. I recall some very moving haiku from the group, several of whom went to the library to research the form (this was before the web). These are the kinds of adventures that you could only pull off in the perfect environment of curiosity and learning.

After college, I took a break from gaming for a while while in grad school. It didn't last long and eventually I reconnected with my old high school friends to try out this new game called Magic: The Gathering. D&D was too involved and time consuming, but a few games of Magic only took a couple hours. This was around 1993, before we knew the addictive nature of the game. I went nuts buying packs, showing up each week with cooler cards to beat my friends. An arms race was developing among us, but we had a great time anyway. Eventually the job that allowed me to travel to visit my friends dried up and my gaming went dormant for a while longer, with only occasional Magic games with those I could corrupt into playing.

After grad school, a friend got me started with D&D again. It was the mid-90's, but we went back to our roots with 1st Edition. That lasted a couple years, resurrecting my interest in gaming and distracting me from a job I didn't care for. Eventually that group dissolved, and in my spare time I started looking for what was new in D&D. I discovered Planescape and was enthralled. The philosophy in Planescape never quite worked as it was supposed to, but I was willing to twist it into shape. I bought every supplement, read every book, created a website dedicated to the bariaur and eventually created a campaign with the IT department at Brightware, where I worked. This was a few months before the dot-com implosion and we happily explored the multiverse in the board room of the company.

That group eventually migrated to my house after the company died and the department went their separate ways. I maintained a 2nd Edition campaign until 2000, when I swore we would never move to 3rd Edition D&D. I was the first to insist on the migration as the Player's Handbook was looking pretty amazing. Four years later, I decided my passion for games, really this one game, was enough to allow me to open a game store. I was woefully ignorant and my gaming background was actually quite light, at least compared to people I know now (still, my friends might think of me as a fanatical gamer).

Since opening the store, I've learned a couple hundred board games, built full armies for Flames of War, Warhammer Fantasy and Warhammer 40K, and played in half a dozen more role-playing games, including Warhammer Fantasy RolePlay, D20 Modern, Mongoose Traveller, Mutants and Masterminds, and Spirit of the Century. Mostly I've delved deeper into my first gaming love, Dungeons & Dragons. My priority is my family, especially my son, but I believe you need to carve out a niche of time for yourself if you want to preserve other important things in your life. 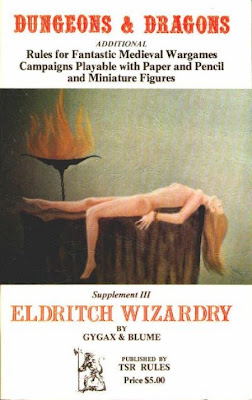