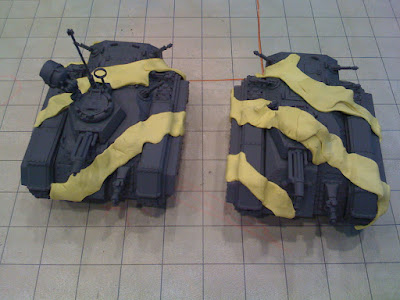 Stripes! After 9 vehicles, I've found that the best looking camo patterns, in my opinon, are organic stripes. Attempts to break up the pattern by applying splotchy bits looks bad. 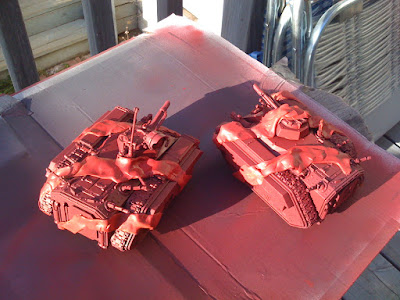 What was the secret to using regular Citadel paints with the spray gun? Nothing really, although having a clean spray gun is a start. My nozzle was clogged, which caused some delay as I searched for a magic formula, but after a good cleaning, the standard formula shown on the bottle worked fine. I did notice that a single coat is not as bright as my brush painted vehicles. I tried one vehicle with a coat of foundation Mechrite Red, then a coat of Scab Red, but it didn't make it any brighter. I'll need at least another coat of scab. 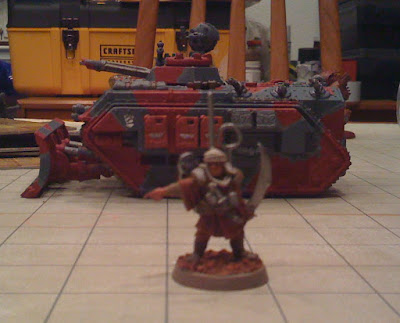 He's a bit out of focus (stupid iPhone), but this sergeant has been promoted to Master of Ordinance. He's got a vox caster on his back, a plastic Cadian bit. He's also been modified with a Cadian arm from a Basilisk sprue. This model has the stock sword blade, but my other Tallarn sergeants have different blades borrowed from various sources. It provides each one a signature weapon; very fluffy.

Next it's back to the store for more spray propellant and scab red paint.
Posted by Gary Ray at Saturday, May 16, 2009