I finally gave in and scheduled AT-43 for a Thursday night time slot. It became clear after a number of customers came in today and asked for one, including a couple guys who just started the game by buying a starter box. I also scheduled several other events for this slow evening, so I had other motives as well.
Right now we're seeing our weak day as Thursday. Monday was slow in the last store. Some people say one day of the week is inevitably slow, but I don't want to believe that yet. We're throwing small events on Thursday nights in hopes that a few of them stick.
The sign should be up tomorrow. We had an unusual problem. We couldn't find the crawl space behind where the channel letters are attached. Did you know there's usually a little attic door behind a store's sign area? Ours was located in the space next store. As you may recall, the space we're in now was once part of a larger space. They divided them up, with us taking the larger part. Another related problem we still have is that the second air conditioner blows air into the other space. It's off until they re-work the ducts. The front AC works well enough for our entire space.
Sales data since we've opened is pretty interesting. Warhammer 40K is now our number two game, trailing slightly behind Warmachine. It was languishing at #11 before the move. Both are four times higher in sales than the next games below them. I see the GW sales as a temporary blip, a kind of new store house warming gift that requires us to now take responsibility for our new found community. They need proper care and feeding (appropriate stock and lots of play space and learning events). It's the game I'm putting the most effort into planning, so I hope we can rise to the occasion.
Melissa & Doug has cracked the top ten. We've been selling a lot of puzzles, art supplies, doll house accessories and learning blocks.

I finally moved some Thomas Wooden Railway. Unfortunately I moved it to my office as part of a recall due to lead paint. That Cranky the Crane is up to no good, I tell ya. This is the line I had the most hope for, but I'm now realizing it's the most specific and requires some advertising to get the word out. 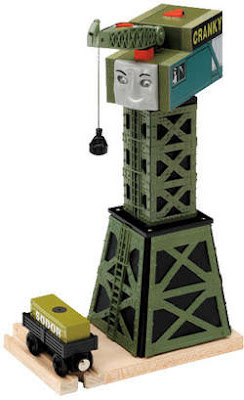 That little green train car has unsafe levels of lead paint. We had three of these in stock. None were sold.