The defeat of my Moongazer clan ogres against the orcs can be found here. This battle will likely be re-fought soon. The orcs force marched to my capitol and now occupy it. That just won't do. 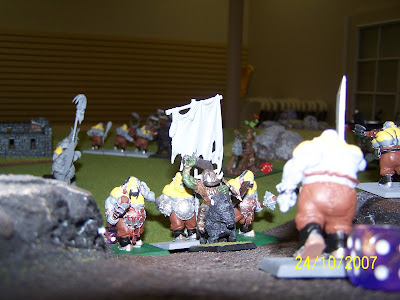 Warhammer Fantasy is supposedly a lot like chess. I'm still learning, so it's easy to make mistakes based on misconceptions. For example, my strategy in this battle was flawed. I played it as a longer game, owning the center of the field and setting up covering fire at a substantial loss to my grunts. The orc general was allowed to slaughter a couple units while I did my thing - big mistake on my part. Then it was over before any of that set up could be implemented. As a four turn game, based on our campaign rules, it was the wins and losses in the early turns that mattered.