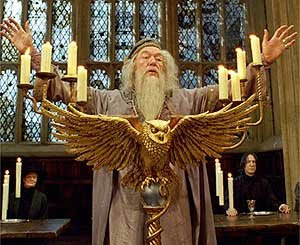 "The British author stunned her fans at Carnegie Hall on Friday night when she answered one young reader's question about Dumbledore by saying that he was gay and had been in love with Grindelwald, whom he had defeated years ago in a bitter fight."

So if you thought witchcraft upsets the religious right, just wait! Let the games begin! Actually, lets hope for another "Meh" response. Various bloggers wait to see if Potter foes go nuts. See this CNN article for more information or search for "Dumbledore is Gay" and "blog" for what appears to be universal approval. I think she's just messing with people, and I find it quite entertaining.

"You cannot imagine how his ideas caught me, Harry, inflamed me"
--Dumbledore

While on the topic, it's interesting to note that one of the few things in role-playing games that's generally frowned upon is open displays of sexuality. Not bathing is totally cool, but talk of sex is a no-no. Gay characters, openly sexual characters, and even men playing female characters are generally issues that make people unfomfortable. It's a little unfortunate because as most players are men (or boys), how they play those characters reveals a lot about them.

In general, sexuality, especially homosexuality, seems to bring reality into a game that's mostly known for escape. Even in evil campaigns, most players draw the line at rape. Murdering and rending souls can pass muster, but some issues are best left in the real world. I prefer "low fantasy" myself, scrounging for a copper piece to buy a piece of bread for the day, but as one gaming friend told me: "I do low fantasy all day long. That's not how I want to spend my free time." My guess is that some people may feel the same about issues of reality entering their fantasy novels. Then again, as one blogger pointed out, by the age of 12-13, most kids know if they're gay, and Rowling now provides them a touchstone in her novels.
Posted by Gary Ray at Monday, October 22, 2007