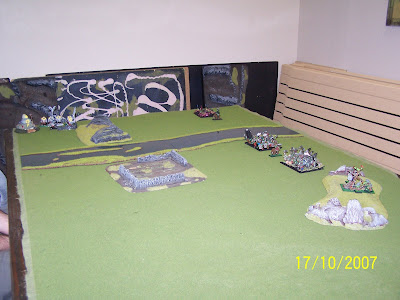 If you enlarge this photo you can see my 7 ogres sitting in the upper left corner. They fought their first battle to a draw against a force twice their point value. They basically stayed behind a hill and hid from the artillery, waiting everyone out. Whenever they emerged, giant rocks came raining down, so they thought best to remain hidden. Opponents would run up, the ogres would jump out, the opponents would run away, and the rocks would start falling again.

Griffin has a great in-character description of the battle in his blog here.
Posted by Gary Ray at Monday, October 22, 2007