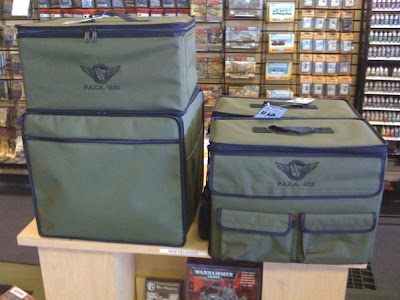 The Battlefoam cases arrived. These are the highest quality foam cases you can buy. They've got two main features:
These cases aren't for everyone, however. Although they make trays for the Sabol system, the Battlefoam system is not compatible with Sabol. The price can be a shock at first, but you have to remember you'll only need half as many trays as Sabol. The cost works out to at least the same or slightly better, but in a smaller footprint, making this a win.

We're also carrying about 20 different troop trays for various armies and games, along with foam "pluck" trays in 1", 2" and 3". Distributors don't have vehicle trays yet, so the option is to either put your vehicles in pluck trays or order vehicle trays direct from Battlefoam.

If you're using a Sabol system now, you'll probably pass on Battlefoam unless you travel a lot with your army. However, if you need a new case, especially one that won't take up much room, or like me, your army takes up more Sabol cases than you can physically carry, Battlefoam is the way to go.
Posted by Gary Ray at Wednesday, July 15, 2009