I spent the weekend painting three Forge World Leman Russ Demolishers. They use the treads from a standard Leman Russ, a Forge World four part resin body kit, and Kreig Demolisher turrets. I added some extra bits, such as track guards, trench rails, and the Tallarn tank commander. What's different with this project is I decided to weather the models.

Weathering is something I've avoided. You take a perfectly good vehicle that you've spent many hours painting, and you somehow make it look better by making it look worse. I used to be an auto detailing freak. I could talk your ear off about the various merits of microfiber towels. Companies use to send me samples in hopes I would talk about them. If you think I don't have a life now, you should have seen me then!

In any case, weathering seems like counter-intuitive black magic. The impetus to take on weathering was the general dislike I had for these vehicles once they were painted. The Forge World stuff screams to be weathered. It's big, simple, and less detailed than plastic kits. I was already unhappy with the paint job, what did I have to lose?

It turns out basic weathering is really simple. With the tanks below I performed four steps: 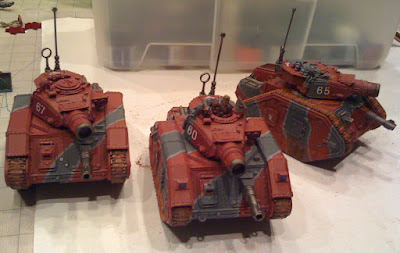 Step one was my usual washing of metallic bits. I used Badab Black wash to knock down the shiny metallic paint (also using a coat of Devlan Mud can give it a more rusty look). I also use the wash on tracks, after an undercoat of Tin Bitz and a dry brush of boltgun metal. That formula is mentioned in the old Imperial Guard codex. Some people recommend washing the entire tank. Although it might have been an interesting experiment, I didn't want these vehicles to look too different from my ten others.

Step two was to lightly drybrush the entire tank with bleached bone. If you do nothing else, do a quick drybrush. This made every rivet and panel pop. The Forge World parts suddenly came to life. 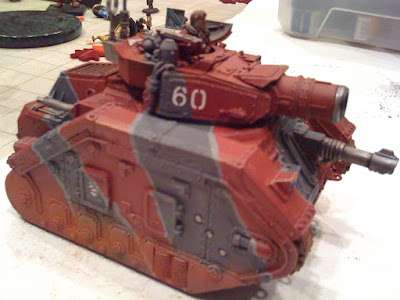 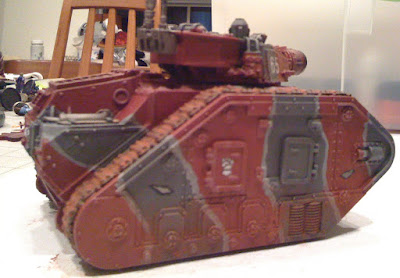 Step 3 was to create a little battle damage. There are many ways to do this, and I hope to learn more of them soon (the Citadel tank painting book comes out this week). The tutorial I used was online from The Painting Corps. The article discusses how to make simple battle damage using chaos black and boltgun metal. Just draw a mark in black and after it dries, fill it in with gunmetal, leaving a black outline. I envision the horizontal lines as being laser scorches, while I think of the circles as gunfire, like from an autocannon. 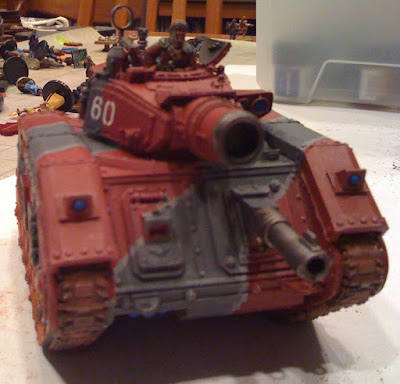 Step 4 involved some black magic. A few years ago a customer brought me a little box of weathering compound. It sat in the bottom of my paint box until I discovered it a few weeks ago and noticed that it had an excellent brick colored medium, perfect for my red desert Tallarn. The stuff is called Weather System by Bragdon Enterprises and I'm now a fan. We don't sell it at the store, so you'll need to order it direct.

It's unclear exactly what this stuff is; some kind of finely ground minerals. It's what you get when an art major dabbles in geology, Bragdon's background. It is not chalk, so you don't get the problems you may have heard about with weathering compounds, such as being prone to fingerprints or rubbing off. It has some sort of self-adhesive system that works great. You brush it on in layers, like a wash, and what adheres, stays put. What doesn't adhere falls off onto your work surface and is easily re-used. What it does not like is spray varnish, which tends to break it down. Anyway, as you can see here, it provided me excellent weathering effects on the tracks and sides.

Where would I go from here? I would like to learn the best way to add rust effects. I want to make more battle damage and crash damage. Next time I may use a pin vice or dremel to make bullet holes before painting to create interesting effects.
Posted by Gary Ray at Sunday, July 26, 2009