I took home one of the new Planetstrike Skyshield Landing Pads this week to paint up for the store. It seemed to need a little pimping as we haven't sold any, despite how cool they look. The bastions appeared to be the best bang for the buck, at around $30 (GW's idiotic $29.75 price tag) compared to the skyshields $40 price tag ($39.50; stupid bean counters). The problem, I think, is the photos on the boxes. The skyshield is simply a much larger model (or the bastion is smaller), and when you see the price tags on boxes of the same size, this isn't conveyed. My first impression of the bastion put together was that I thought it would be bigger. Once you see a skyshield up close, it's pretty impressive. The photo below shows their relative size. 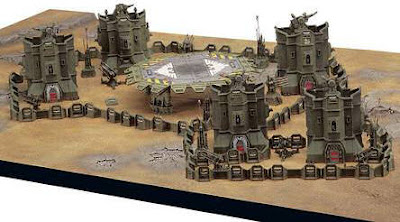 Painted by the GW experts
Assembly took a few hours. There are multiples of only two sprues. You basically have the four platform pieces, the outer wall pieces, a hinge piece for each wall piece since they go up and down, and the legs. This YouTube video shows you what's in the box. It's a very simple kit, and almost foolproof. Almost.

My advice is to go slowly on this one. Heck, built two at a time. It's not complicated, but it's important that the glue dry at each step before moving forward. The hinged walls are prone to get a bit wonky if you rush it, and the fix is difficult. It took an extra hour to get a couple walls fixed because of this. I think I could build the second one in two hours total (probably over 3-4 hours while doing something else). 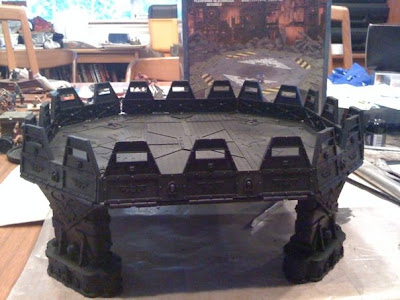 The first thing you realize when it's together is it would make an excellent terrain piece in any 40K game. Yes, the skyshield has awesome rules in Planetstrike, but it would make a cool centerpiece objective in a standard game. What you don't see from photos are the four trapdoors on the landing pad. On the insides of each leg is a ladder leading up to each door. I can imagine ruling that it takes a full turn to get up a ladder (it's about 6"), while enemies above rain down death. But try to defend four entry points!

Next is painting. Michael painted a bastion for the store in yellow, so I'll be painting up the skyshield to match. I'm thinking of white dry-brushing and highlights unless someone has some better color advice. I've also got some bastion walls to paint, which look super easy. All of these terrain pieces are textured with various details, like bullet holes. They just scream "dry brush me!" As for painting, I'm just happy to shoot something out of my spray gun other than red and grey.
Posted by Gary Ray at Wednesday, July 08, 2009