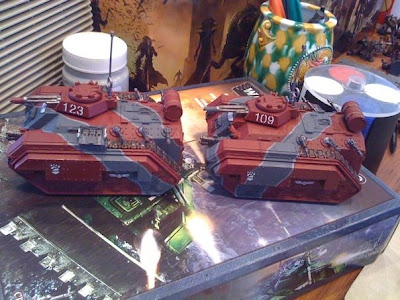 I finished my sixth and seventh chimeras for my 40K army. It's really eight and nine if you include the two I sold off because the paint schemes didn't match. Playing against space marines, I've realized that mobility is key, men out in the open die quickly, and artillery pieces without support are blown up in a heartbeat. This will put all my squads in chimeras. Next is armor.

I've come up with a few ideas to help me focus with the armor. There are so many variants that it can become bewildering. Do you build your army around your armor? Does armor support infantry or vice versa? Do you go with the German doctrine of armor kills infantry and infantry kills armor? Do you go with mobility or do you load up your tank as a stationary gun platform? Do you somehow find a way to make that awesome Vanquisher work?

First, I've gone with mobility, since the rest of my army is mechanized. This means sponsons are bad, as they impede mobility of tanks. They don't physically stop them from moving, but they discourage movement because of the firing rules. You can't move and fire all of them. You end up wasting those points if you move. As for which tanks, I'm probably going to mix it up. They're like fine scalpels. I like the Demolisher as a strong, short range, versatile anti-tank weapon. The Exterminator is a vicious anti-infantry tank. The Leman Russ Battle Tank, the vanilla version, is an all around good weapon, good at anything. I'll put lascannons on all of them and see what happens. I have a feeling I'll eventually have many variants. I still haven't figured out what my main army is lacking. More games should give me a better idea.

Here's another good article from Bell of Lost Souls called Which Russ Type? 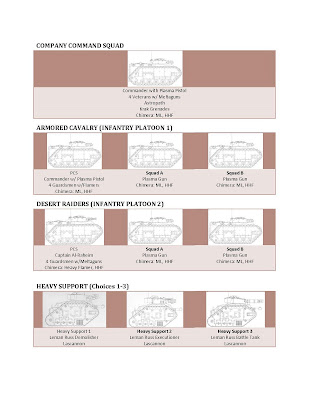