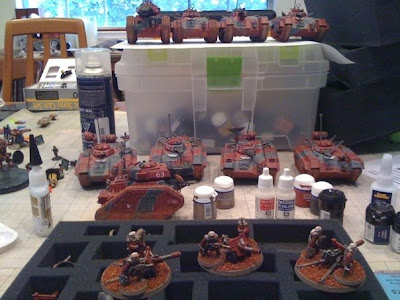 My gaming time over the weekend consisted of what you see here. The tanks all got a healthy dry brushing, along with a layer of weathering compound (pulverized bricks). That took about a half an hour per vehicle. The heavy weapons teams got based as well using 60mm bases. One model of the two man team is glued to the base, along with the lascannon. The second model, the right hand guy, is attached via magnets. When the unit takes a wound, you remove the magnetized guy. It's crude, but effective. I only plan to use them in 1,000 point games; my 500 point list beng too small and my 1,500 point list having a different strategy. 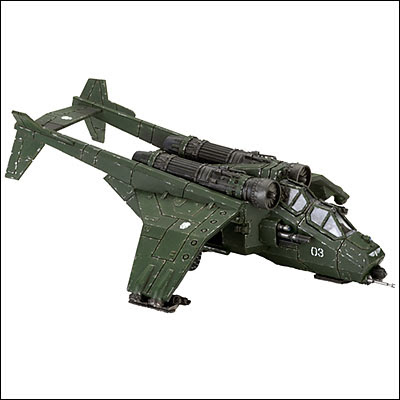 I bought a Valkyrie today after selling some models in the store. I had some Forge World turrets and IG advisors that sold, enough to cover this cool vehicle. It didn't take long before I realized what I really wanted was the Vendetta variant. It doesn't say this anywhere, but you can't built a Vendetta without a bunch of bits, mostly twin linked lascannons from various space marine models. The other option is a Forge World Vendetta conversion kit, which should have been included in this kit, if you ask me. 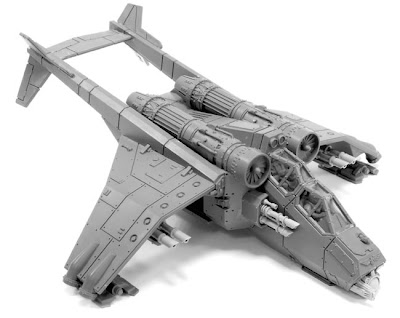 Vendetta kit from Forge World installed
So with parts on order from England (1-4 week delivery time), this project is stalled. When I got home tonight, I took the Black Box off the shelf and started assembling the new Hellhound kit, configured as a Bane Wolf. This kit is truly modular, with the turret assembly easily taking any of the three variants by inserting the ends into the end of the turret. No magnets, nothing special, just a modular design. I'll take some photos when I start painting.

Finally, the big modeling question is how do you paint a Valkyrie/Vendetta? The answer for me is a tension between: a) how I envision the vehicle attached to my army (fluff) and b) the aesthetics of the paint job. If this naval model is permanently attached to my army, it would adopt their paint scheme. I envisioned that the Vendetta wouldn't be, since it doesn't fit the Tallarn background. As for "b," I've heard others recommend painting it to match their army so that the army feels more aesthetically unified on the table. I'm leaning towards this second view, as tired as I am of painting the existing red and gray paint scheme. I hear the howl of space wolves in my future.
Posted by Gary Ray at Monday, August 03, 2009