In my mind, this Summer is characterized by product shortages and companies hedging on releases. This can sometimes be great for us, such as when we plan ahead and corner the market on product. Product shortages always favor the big store that can leverage their cash flow to bring in more product. Most often, shortages hurt stores, and that's definitely where we're at on some key products. There are various reasons why this is happening, and there are various ways in which manufacturers intentionally or unintentionally facilitate it. Lets look at a few:

Games Workshop. Of all game companies, GW has the best "fill rate," or product availability in the industry. They hedge in another way, through one-shot product releases and direct only items. Lately their direct only items haven't made a lot of sense. For example, one of the interesting new features of the Imperial Guard codex is advisers. The adviser blister is direct only, which makes little sense. We brought them in anyway and it's a best seller. Blastscapes for Planetstrike also seem somewhat important for that game, but it was a limited run as was the very popular Imperial Strongpoint. Space Hulk was announced this morning as a limited run as well. We sold out of strongpoints as the Fedex guy delivered them, handing them to a customer right out of the box. It was never seen again. This shows a lot of caution on their part, but being over cautious, as any store owner will tell you, will eat into your sales. 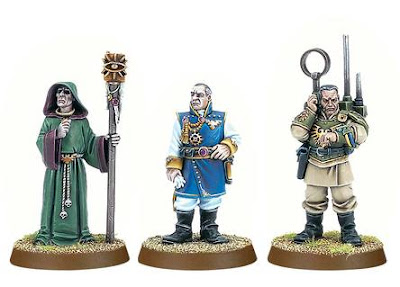 Wizards of the Coast. I've had good sources tell me that the Magic shortage was not intentional. This was a major goof on the part of WOTC and they would like nothing more than to have Magic 2010 back in stock. Ebay sellers are offering 2010 for the third wave release on September 11th; that's how limited this item has been. Ironically, being well stocked on Magic has helped us weather other product outages.

Bandai. This is a company that makes two types of product: wildly successful and horribly disappointing. For us, Naruto has been wildly successful and Battle Spirits is gaining some early traction. Unfortunately, Bandai hedges on Naruto, printing to order and keeping inventory so tight that the product is sold out on release day. Again, not a great move if you want to maximize sales, but wonderful if you want to book limited profits with no risk.

Paizo. This is the one that has me the most confused. Pathfinder was released only with enough copies to fill pre-orders at distribution, resulting in a sell-out announcement before the release date. Of course, I know where a lot of those books went last week. A large amount went to Gencon, as well as being used for their website sales. A publisher makes over twice as much money on a book if they can avoid the middle man (like me). 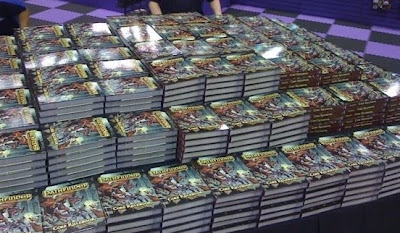 Pathfinder (sold out) on the floor of Gencon
I think this is also a sign of an improving economy. If companies are being cautious and we're seeing a number of sell-outs, perhaps gamers are spending more. It might also mean publishers aren't reading the market properly. There are winners and losers in a rough economy. Those that create top tier products continue getting the sale, while marginal products are strongly avoided; it's that flight to quality term I used a while back. Unfortunately, these top tier companies are the ones we notice when product runs dry.
Posted by Gary Ray at Monday, August 17, 2009