The Joy of Paint

So what hobby paint is best? I hear this daily since we carry five lines of paint.

Vallejo Model Color has over 250 colors, including a bunch of cool experimental concoctions like metallic medium and a plastic putty that I swear is best for gap filling. 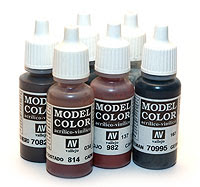 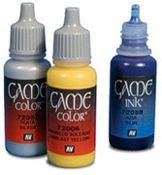 Privateer Press P3 paints are a well designed group of paints known for their cohesive pigments that allow watering down without separation. They're the one paint line that works significantly differently than its competitors. If you dry brush, you'll need to re-learn that technique, for example. Some of our expert painters swear by them.

Reaper Master Series paints are top notch paints at an affordable price; they're my second favorite paints after GW and the paint I would use if I ever got serious about painting. I think they hit a sweet spot: less expensive ($2.99 versus $3.99), easy to use, and capable of great things in capable hands. Right now we sell the line in triad format (3 bottles per blister pack). 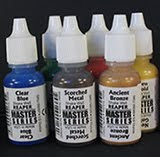 Games Workshop paints outsell all of these combined by about six to one and include a great system of base coating, standard coat and paint washes. The three step GW method is easy and you can get excellent results with a few, simple techniques. If you're painting an army of models, this is my recommendation. If you haven't tried them in several years, they're much improved. 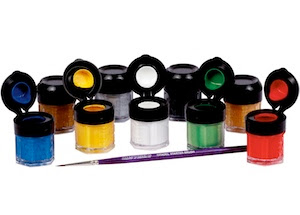 That doesn't answer the question though, which is best? Here's my little story: We used to have painting contests at the store. We had a guy win second place at the store in our Reaper Exalted miniature painting contest. It just so happened that Reaper was holding an identical contest, so he submitted the model with them after our contest finished and won first place. The Bay Area painting community is second to none. The guy who won that contest used cheap craft paints from Michael's. Other painters swear by Games Workshop, Reaper Master Series, or Vallejo Model Color. Honestly, there are simply no bad paints nowadays, just paints that are better when using certain techniques than others. Most non-experts could pick any of them and get good results.
That's my way of getting around to mentioning that we're considering dropping the Vallejo Model Color line. It's virtue was that it worked well with Flames of War. There is a strong correlation of sales between the two brands, or more accurately, lack thereof. What I've wanted for several years is the complete Reaper Master Series paint rack with over 250 paints. We have the equivalent in Reaper Triads, but you can't buy by the bottle. Dropping Model Color is more of a space issue than a cost issue, so I'm open to debate and input about dropping the line. I'll probably drop triads at the same time, since they're redundant. The danger of adding a paint line to a store is that you can't pry those paints out of your customers hands once they've embraced them. You can lose a customer over a paint line and I certainly don't want to do that.
Posted by Gary Ray at Saturday, July 17, 2010