Our volunteer system of organized play generally works pretty well, but it requires interested people to step up to run their event. Sometimes this needs fostering, and on many occasions we've had staff run events to attempt to encourage this, such as with Warhammer Fantasy (a game desperately in need of volunteers). In the case of 40K, it's a game that's considered so critical to our success, we've simply decided to make it a staff run event. Many games wouldn't get on the calendar if it wasn't for volunteers, including most card games, so I'm not about to abandon that.

What if you don't see an event you want? That's the purpose of my writing this today. All events started small. To get an embryonic event started, all it takes is two people willing to show up at the same time every week for a set period of time. Usually it takes three months. If you want an event that's not on the calendar, find an open slot, let us know your intentions, and start playing. Once it's established you can actually make it consistently, we'll pimp your event through Facebook, Twitter, direct email, and most importantly, to customers who buy the game you play.

If after three months nobody has joined you, it's fairly safe to say it's not going to happen, at least not now. That's highly unlikely. What will likely happen is you'll gather a group around yourself and you can be a bit more relaxed about being there every week and you'll be having a lot more fun with your new group.

Games desperately in need of this treatment: Warhammer Fantasy Battles, Flames of War, and Malifaux. Warmachine and Hordes could use a dedicated event as well. 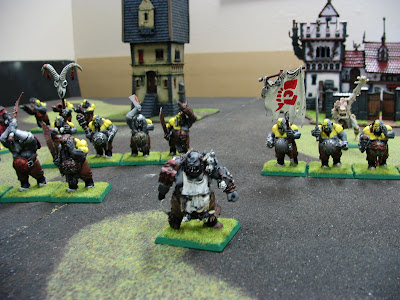