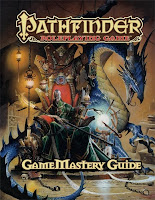 GameMastery Guide is one of those "what does it all mean and how does it happen?" books, the meta of gaming. It goes over the nuts and bolts of what gaming is, discussing basics like snacks at the table and player absences, types of players, and group dynamics. The Creating a World section is particularly good, in fact it inspired me to buy the second book we'll take a look at.

If you're looking for practical application in this book, you'll find some excellent toolbox sections for brainstorming or on-the-fly adventures. Dozens of fully statted out NPCs of various level and purpose grace the final chapter, a treasure trove of what's often the hardest thing to develop for Pathfinder, people.

So what do I think? It's very well done. Granted, I've read something like eight versions of a book like this over the last few decades, but this one strikes me as the best organized and most "feature rich." If you're new to game mastering, you should absolutely pick this up for the insights into running a game. It's certainly the best book of its kind in print.

If you're a veteran gamer, you'll probably skip the first 100 pages or so and still uncover new insights on world building, advanced topics like chase dynamic and sanity, along with that rogue's gallery of NPC's. Paizo is the innovator when it comes to D&D adventure writing and they've filled this book with their ideas. For veterans it's more reference book than straight read, and I've already referred back to it several times while thinking about a new campaign. It's hardcover with 320 pages for $39.95. 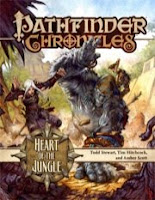 Pathinder Chronicles: Heart of the Jungle: I've been happily running an urban campaign for ten years now and I'm currently running the Council of Thieves adventure path. The GameMastery Guide got me thinking about a different kind of campaign, a primeval campaign with no established civilization. Heart of the Jungle scratches that itch.

Think Tarzan or King Kong. You've got an impenetrable jungle with a bunch of disparate tribes protecting their territories against trading companies and explorers that want to exploit them. The jungle itself is the major NPC here, with the first chapter discussing all the hazards and diseases it uses to wear down and kill intrepid adventurers. It will literally eat them alive. The chapter is rather insightful, with many hazards designed to just immobilize the party in clever ways so the jungle denizens can have a snack at their expense. I couldn't help but cackle. There's nearly a page just on quicksand, explained correctly and utilized fully for the DM's hijinx. I can't help thinking of constantly on the move explorers, a few steps ahead of some unknown peril that's chasing them and suddenly they're trapped.

The jungle is meant to feel vast and includes your typical tropical forests, piranha (and worse) filled rivers, nearby mountains, swamps and deserts and a variety of jungle cities and trader way points to help keep the party alive. Anything could be out there, including ruins of ancient civilizations, the largest of monsters, and gold, tons and tons of gold I tell you! Flecks of the yellow stuff flow down the rivers, hinting at vast deposits deep in the jungle. I bet there's a city of gold somewhere in there. Shall we find it?

Pygmies, sentient gorilla demon worshippers, halfling head hunters, Sleestak like lizard men and a half dozen tribes of humans roam the jungle, protecting their land from invaders or searching for new victims. My thinking is I would like a campaign where the adventurers are natives. Paizo had another idea, and starting in the next couple months, you may find yourself shipwrecked, playing in the new Serpent Skull adventure path which takes place in the region. This is a preview book of what's to come.

Heart of the Jungle is an excellent jungle source book. It's big on ideas and light on concrete examples (thus the adventure path). It has an African feel to it without being too African, if you know what I mean. The names feel African, it includes a well done religion section on animism and black magic (bad juju), but culturally it's not really African. This leaves you flexibility without having to play Nyambe African Adventures. Or heck, go pick up a used copy of D20 Nyambe and have at it in Pathfinder's Mwangi Expanse.

The book is broad enough to allow for many types of adventures or campaigns in the jungle from different perspective, and the there are many examples. Consider a shipwreck, or escaped prisoners, or native resistance fighters or imperialist conquerors, or your typical Indiana Jones style fetch the ancient artifact mission that goes horribly wrong. Most importantly, Heart of the Jungle is a fun read, which is the main reason I buy Paizo supplements. It's softcover, 64 pages, $19.99.
Posted by Gary Ray at Sunday, July 18, 2010