Gencon is next week and many game companies have big releases planned around this time. Here are some of the role-playing releases we know will be in next week: 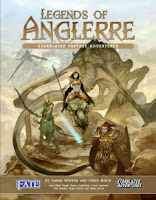 
8/5
Explore new and uncharted depths of roleplaying with the Pathfinder RPG Advanced Player’s Guide! Empower your existing characters with expanded rules for all 11 Pathfinder Roleplaying Game core classes and seven core races, or build a new one from the ground up with one of six brand-new, 20-level base classes. Whether you’re designing your own monstrous helpers as an enigmatic summoner, brewing up trouble with a grimy urban alchemist, or simply teaching an old rogue a new trick, this book has everything you need to make your heroes more heroic. 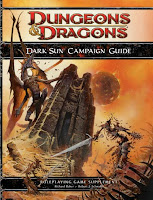 Aimed at players and Dungeon Masters, this game supplement explores the heroes and wonders of Athas—a savage desert world abandoned by the gods and ruled by terrible sorcerer-kings. Use it to build Dark Sun heroes and thrilling D&D adventures set in the Seven Cities of the Tyr Region, the Ivory Triangle, the Sea of Silt, and monster-infested wastelands—or plunder it for your own D&D campaign!
The Dark Sun Campaign Setting provides exciting character options for D&D players, including new races, new character themes and class builds, new paragon paths and epic destinies, and new equipment. It also provides everything Dungeon Masters need to run 4th Edition Dark Sun campaigns or include Dark Sun elements in their homebrew campaigns. It has rules and advice for handling survival challenges, arena encounters, desert terrain, and adventure creation. It also presents a short, ready-to-play introductory adventure.

There are other releases from Mongoose, Cubicle 7 and others, but this is what we're bringing in.
Posted by Gary Ray at Wednesday, July 28, 2010