Months ago we made the decision to stock every Pathfinder product. There was a certain resistance to Paizo, based on their business model, that was becoming illogical. Strong sales of Pathfinder rulebooks were a sign that we were missing out. There were players coming off their D&D 4E campaigns, groups that had formed upon the release of the new edition, that were searching for something different. I was one. Stocking everything Pathfinder put it on equal footing with D&D 4 and bizarrely, defied the rule that supplements were poor selling books aimed at game masters. I believe this is because of the excellent writing.

We now see that Pathfinder and D&D 4 are taking turns each month as best seller. The business model of a rulebook with crunch every month is occasionally losing out to the company that publishes interesting adventures and supplements. The retail pattern shows D&D 4 sales as very spiky, with new releases taking up the majority of sales each month and back list items languishing, while Pathfinder sales, for us, constantly span the entire range of products, albeit with new products seeing only modest sales at first. 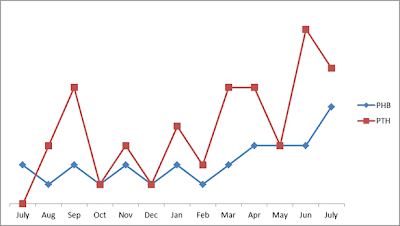 On average, we're now seeing Pathfinder rulebooks outsell D&D 4 Player's Handbooks by two to one. On the plus side, both are seeing increased sales as we leave the recession behind (at least for some). Meanwhile, our previously strong sales of D&D 3.5 new and used books has plummeted. In fact, we're no longer keen on bringing more in or paying a premium for used books. The secondary migration from 3.5 has begun, and surprisingly, not to 4E but to Pathfinder.

Pathfinder Society organized play grew from one table every other week to three tables per week, at least so far this month. The predicted D&D apocalypse has failed to materialize. In its place we have a very interesting forked model. I can't wait to see what happens next.
Posted by Gary Ray at Wednesday, July 21, 2010