In the last post, I broke down our sales by department. In this post, I'm looking at collectible card games in particular, along with living card games, which I lump into the same department. As you can see, Magic dominates, although it wasn't always quite this large. Wizards of the Coast admitted recently that their 2011 sales for Magic were double the previous year, and that's directly reflected in our booming sales. 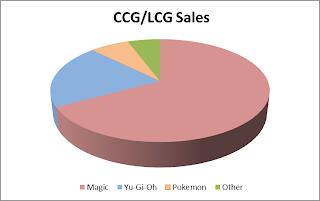 When I think of CCGs, I think of the boom periods of the 90's, when store owners were buying houses and boats on the massive amounts of cash coming in from games like Pokemon. I got into the game trade about 8 years ago, opening my doors with 34 CCGs in stock, only to see them crash and burn a couple years afterwards. So now I see CCGs as a mature market.

The market is dominated by a few key players, with various others on the edges trying to weasel in. It reminds me of the soft drink industry, also a mature market, where Coke dominates (like Magic), Pepsi is a strong challenger (like Yugioh, the game of a new generation), Cadbury-Schweppes (now Dr. Pepper Snapple Group) carries the top off brands (our Pokemon position), and the rest of the crowd fights for survival.