Beggars can't be choosers, is the expression that comes to mind. I requested very publicly on my blog and Enworld that Kickstarter projects include levels for retailers. Since then, I've received half a dozen retailer supported projects (including Indiegogo), plus I've supported ten projects that are in progress. The bottom line for me as a retailer, it doesn't really work.

There are two types of crowd sourced projects, the truly indie project that would never see the light of day without crowd sourcing and the established publisher looking to cash in on easy financing. I really like bringing the light of day to the first group. About a third of gaming projects constitute new designers, and that's exciting. Unfortunately, the economics of the indie project don't work for me.

The quantity I need to order is too high, so the product won't come close to selling through. My average annual RPG turn rate is 3, high compared to most stores, and the minimum quantity required to support a Kickstarter project at the retail tiers is around 6-12 copies. A two year to four year supply of any product is simply too much. That's why we have distributors, to break that quantity into bite sized chunks.

Although I like supporting the indie guys, it doesn't make sense for me. Despite some huge Kickstarter support numbers, the average game store customer really doesn't care about these projects. These things appear to appeal to the gamer elite, the alphas, the lapsed gamer, and those whose tastes have transcended the mainstream. I sell mainstream, because that's how the rent gets paid, despite yearning for the elite.

The second type of project is the established publisher who will be going through distribution, eventually. The main motivation in carrying this stuff, honestly, is to get a jump and have them early. It also allows me to tell my customers, often the alphas who I have a lot of time to talk to, that we'll get that game when everyone else who supports the Kickstart gets it. In other words, don't buy from them, buy from us. Unfortunately, that strategy is a failure, as the KS project often provides better rewards than I can provide if the customer were to wait. "What, there's a Complete Book of Flying Monkeys? Great, I'll go order it!" So rather than generating buzz, I need to use the Games Workshop marketing strategy: "Surprise!"

The problem with the established publishers is there is no lag time between supporters receiving their goods and distributors. So why buy in at 12 copies on Kickstarter when the distributors will have it three days later? That's exactly what happened with the last product I supported. I would have ordered 2-3 copies from the distributors, but ordered far more than that because I wanted in.

So Kickstarters are not designed for retailers. There is no implied value proposition aimed at us, no promises, only a bone thrown in the corner allowing us to sit at the table. We are appeased by receiving the opportunity to participate, and I do appreciate that, but that doesn't mean we should be involved. There are better uses of our resources than gnawing on that old bone.

I think Kickstarter is an amazing method to get the indie stuff out and a highly questionable method for established publishers, but that's another discussion. The exclusivity of having something fresh and unique on the shelf comes at too high an inventory cost. The product is often not packaged or produced with retailers in mind (posters that come in one big tube, dice candy that melts on the counter). The funds are drawn months before the product is created, resulting in cash flow problems, as our support levels are in the hundreds of dollars rather than the tens. And the emails, oh the many emails, over 120 since I last checked, half of them are probably for Ogre.

I've had my taste of Kickstarter as a retailer, and it's rather sour. However, it's a taste I better acquire soon though, as I've got ten more projects on the way. 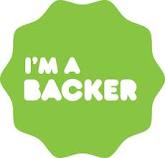