While hanging out and playing Pathfinder, we started talking about how many of each adventure path book we sell and the likelihood that a group actually finishes an adventure path. I'm currently playing in book five of Serpent Skull. I stopped a Council of Thieves campaign after book five when I ran out of steam. I've also had a campaign abort at book two of Legacy of Fire. At the moment I'm running my own Pathfinder sandbox campaign to take a break from the paths.

Pathfinder subscribers get every issue of an adventure path, obviously. They may or may not actually run the adventures, with the suspicious going towards the "not" side. They're awfully fun just to read. In the store, there's more granular control of adventure path book sales, so it should be an indicator of whether these are actually being used or not.

In our conversation, I felt the first one sold very well but the rest were relatively equal, which is not exactly the case. Here's our chart: 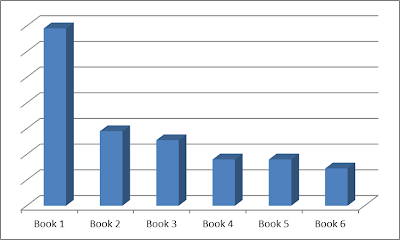 This represents several hundred books going back to the original Rise of the Runelords for 3.5, which we honestly didn't stock like we do now. For the last several years, we've religiously stocked everything Pathfinder, including every in-print Paizo product we can get our hands on.

For adventure paths, we order each new book deep enough to avoid losing sales, and then keep multiple copies of book 1's, which makes sense when you look at the chart. As mentioned in previous posts, adventure paths defy adventure sales logic. The Pathfinder solo adventures still have the traditional slow turn rates of around 2 a year, while the adventure paths are higher, more like game master supplements at around 3. The few hard cover rulebooks still account for about 75% of all the sales of what's now well over 175 products.