Our Magic 2013 Core Set release was very strong yesterday, and other stores across the country also reported good sales and strong Friday Night Magic turnout. I mention this because it's a bit of a surprise. The alpha gamers, the guys we see every day at the store, had dismissed the set. They issued their dire warnings about it, due to there not being a lot of interesting cards, at least to them.

What they don't understand is Magic is a lot bigger now than their core crowd. Magic, nationwide, doubled sales over the last year, and that means a lot of new and returning players. Most stores use DCI numbers issued to determine this rate, and it's very high. So the box pre-orders were faily low (veterans), but the sales on release were about as high as Avacyn Restored, the last blockbuster set a few months ago.

This is the second time this has happened in the last month. Warhammer 40K was also dismissed by veterans, who I foolishly listened to when I under-ordered 6th Edition Rulebooks. The thing is, only a tiny slice of people troll Internet forums and debate rules before they're even published, just as a tiny number of people, less than 10%, buy stuff online (the online buyers are perplexed by this).

Most players of any game are delightedly surprised to find a new book on the shelf and even getting them to know of its release is a painfully difficult process that nears impossibility if they're not actively listening. Oh god how many times have I told a D&D player that we get the books two weeks early?

So when the 40K veteran snidely asked how the new 40K rulebooks were doing, I would give them real numbers: 10, 20, 30, 40.... And they would look shocked, because they're worldview doesn't include all those people. Their friends are "holding off" or waiting for the inevitable, mythical starter box, that hasn't been announced yet. Meanwhile, a lot of people are having a great time with, by all accounts, a pretty good version of the game.

This all goes back to a previous post where I mentioned we listen a little too closely to alpha gamers, because we feel closer to them than casual gamers, because they spend the most money (individually) and because they challenge us to go beyond bread and butter game products. We would probably be them, if we weren't running the store (or maybe we already are, by various measurements). But when it comes to gathering market intelligence? They're rather dangerous to listen to. 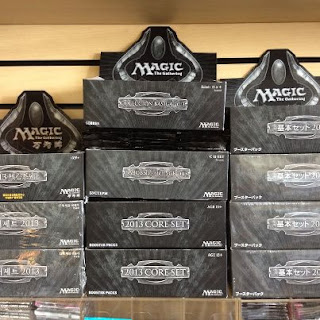