Pathfinder continues to go gangbusters. The core rulebook is our best selling non CCG product in the store, which is pretty amazing. It's a little flat this year as our local market matures. Plus 2012 is going up against sales of Ultimate Magic, which was very strong in 2011. Frog God Games is our first Pathfinder compatible company to make the list (although there's a small amount of Sword & Wizardry in there too). Back in D&D 3.5 days, half this list might have been made up by D20 compatible companies.

Dungeon Crawl Classics RPG (Goodman Games) makes the #10 spot as a late entry and will hopefully continue to grow. DCC won't have a lot of releases, so it likely won't be seen again on this list, although third party publishers appear to be poised to support it and an annual DCC book will likely make a list or two if popularity continues. Despite being a blip on my chart, I believe there will be long term interest in this game (I want to do something with it myself).

The various Warhammer based RPGs by Fantasy Flight have fallen off a cliff this year. Some complain about the prices. Others point out how the Deathwatch core book has been out of print for months now, which is what everyone feared if FFG got hold of an RPG. At this point we've got half the various lines on clearance and no longer carry Warhammer Fantasy Roleplay.

Finally, this chart would go on for another 20+ entries if I didn't cut it off at the top 10.  We're in a mature market once again, like I mentioned with CCGs. 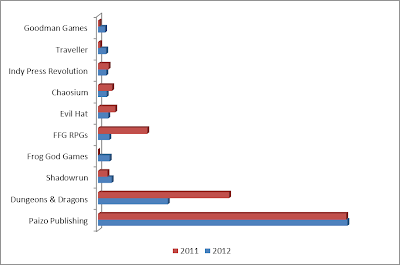