Alright, found the camera. It almost went the way of the dice bag. In the BBC series Red Dwarf, an entire population of cat people evolve over thousands of years in the cargo bay of a ship after a crew members cat gives birth. That's how it is at my house, only it would have been a race of creatures that resemble a brown furry dice bag, and they would all be expert photographers, or maybe worship cameras as their patron deity.

SPOILER ALERT: This is a warning to my D&D group. Don't read this (this means Jess, since she's the only reader).

Below are photos for the "Final Ritual" adventure, the last part of Monte Cook's Night of Dissolution. This will be the culmination of a 7-year campaign. We've actually ran four campaigns in my astral city of Iron Crown, but it was always partially based on Ptolus, long before Ptolus became a book.

Technical Stuff. What you see is Dwarven Forge product. These are modular building pieces that allow you to make any conceivable dungeon, provided you have enough pieces (money). At one point in my life I decided I wanted to have enough DF to make ANYTHING, and I mostly do, although I still lust after the new sets and regret selling my narrow passage set in the store early on.

In this particular setup, I've gone 3D. I've been dabbling with having different dungeon levels on different physical levels, but this is the first time I've laid out a multi level dungeon on multiple levels. This is hard because there is a lot of tweaking of the tiles after you've laid it down. It's not uncommon to have to re-built an entire room, and when it's balanced on a stack of books, it can get tedious.

This setup here is a what I would call a dress rehearsal. It's when I get all my monsters and terrain and put them together at once. It's the only time it will ever be like this, with all the monsters shown and the entire dungeon revealed. I can imagine this actually happening in the adventure. The evil cultists practice their chants and check their machinery. The big bad guy checks his throne, the hand of a dead demon, to make sure it's emitting the right frequency of evil.

I'm still missing some pieces. I'm waiting on some prison doors for the ratmen. They're Fenryll miniatures on order from France. I also bartered to have someone paint up some new Reaper children for the sacrifice. Hey, what's a good evil ritual without child sacrifice? 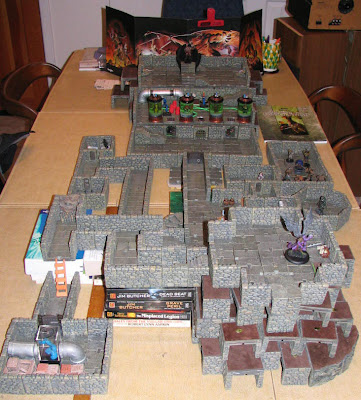 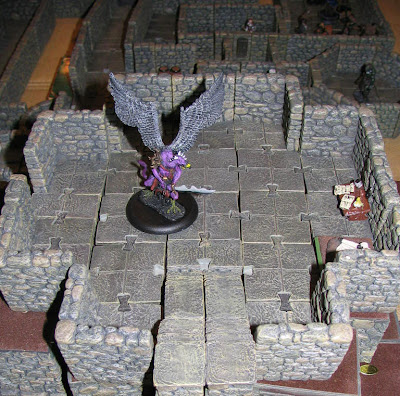 Entry Chamber. This Vrock demon stands guard in this room. It has a device that lets the other cultists know that visitors have arrived, either good or bad. If there's a problem, everyone is alerted through this method and they all move to their battle stations (very bad for the characters). 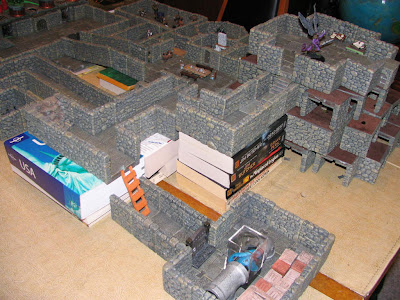 Levels. This photo shows the various levels of the dungeon. I believe there are three levels, connected by regular staircases, spiral staircases, ramps and ladders. Once I get the hang of it I'll be better at hiding the "risers," such as the travel and Dresden Files books. 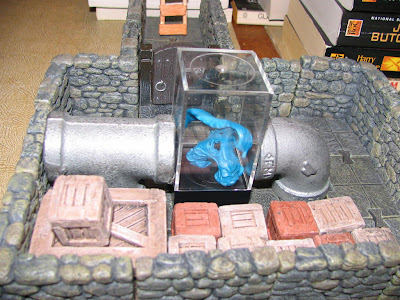 Water Cooler. This isn't part of the written adventure, but I've added it based on how we understand the chaositech technology to work. The silver chaos cubes contain pure chaos energy and (in my game) give off tremendous amounts of heat. In the photo above, a water elemental is used to pump sewer water through a series of pipes that cool the chaos cubes. 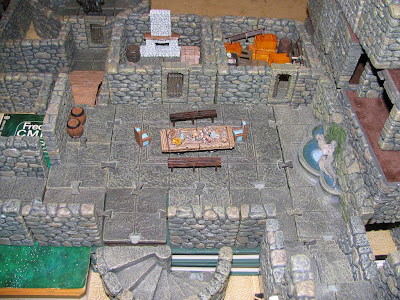 Dining. It's not glamorous, but these kinds of set pieces answer the question of where people eat and do their business. I've modified the scale of the rooms in this layout. First priority was getting it to fit on one table. Second, I wanted the sanctuary at the end to be much larger, since it's such an epic combat. It's double scale. Third, I often redirected rooms or changed their size or shape to make space for the players at the table. A cool layout is great, but if they have to hold their books in their lap, it's distracting. 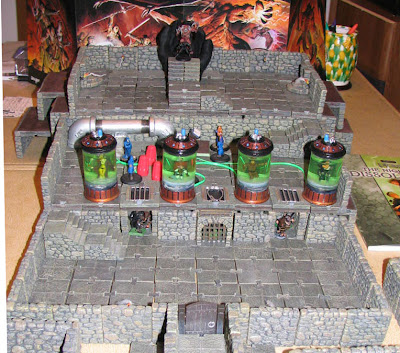 Eschaton Sanctuary: This is where the chaos cultists use pure chaos and magical energy from trapped sorcerers (in the containment chambers), along with the sacrifice of rune children, to awaken a galchutt (think Cthulhu). If this creature awakens, the world is in a heap of big trouble.

The sanctuary is three levels. On the first level, ratmen with powerful rifles shoot intruders. On the second level, the evil cultists are engaged in their ritual and aren't likely to put up much of a fight. The third level holds the big boss demon, a recurring villain who has gained as much power as the characters since they last saw him. The characters need to stop the ritual by various means, or kill all the bad guys, while saving the children and the trapped sorcerers. A good time was had by all. 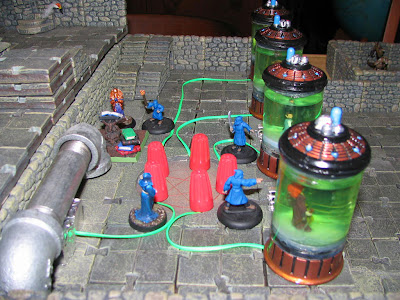 Evil Cultists. Here we have the evil cultists preparing for their ritual. The kids haven't been brought out yet. 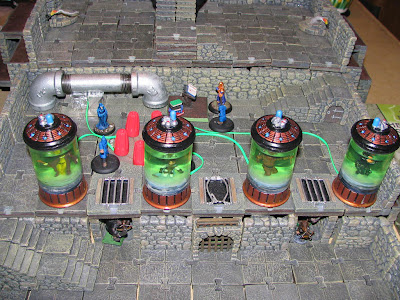 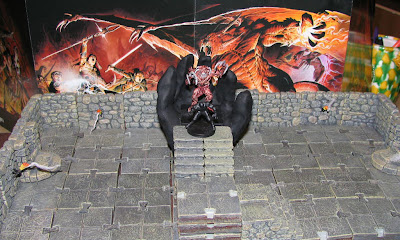 Demon: Our big bad guy sits in his special throne, a bleeding severed hand from a gigantic demon. He will be harassing the party from his throne as they try to disrupt his ritual. This will be the last D&D 3.5 encounter of our campaign, and possibly ever.
Posted by Gary Ray at Friday, April 25, 2008