Why I'm Not Going to GTS 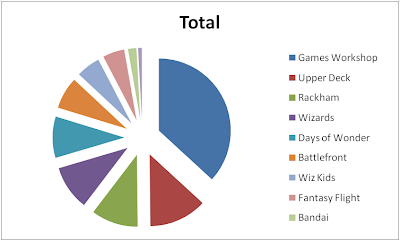 I don't want this to sound bitter or angry. I've been thinking about a way to show the effects of shrinking margins in a more concrete way. Running some reports, I looked at my top ten companies with reduced margins. The goal was to show that reduced margins result in less money available for discretionary spending, like trade shows. I wasn't disappointed. However, as a net amount (a tenth or so of actual sales), it wasn't much higher than a trade show junket. My real reason for not going to GTS is that I'm just burned out on trade shows, although not having any money is a pretty good reason too!

There are a few big caveats here. First, some of these companies have had their discount structure for quite a while. I can't go about blaming Games Workshop for a reduced margin when they've had it for longer than I've been in business. Second, some companies aren't included because they're not what I consider "core" and I generally accept their crap margin. Indie Press Revolution, Warpath (the new indie minis), and various small boutique publishers get a free pass. Most don't rank anyway. Third, necessity is the premise this is built upon. It is true that I could cut off any one of these publishers/manufacturers and be fine, perhaps several if you're picking the small guys, but a game store would have a hard time surviving with a game store identity beyond that.

Game store identity is what we see changing. Store owners question if they can survive as a "pure" game store with shrinking margins and the encroaching Internet. We see some turning to mainstream "entertainment," selling used video games and CD's. Some, like ours, try various forms of diversification, like toys or comics. Others hide behind online presences that prop up their brick and mortar stores. Several have broken into the distribution tier, while others become manufacturers or publishers. We've considered or tried all of these at our store.

The numbers underlying the chart may seem a little odd, and I didn't make it too easy to figure out my sales numbers (I don't want to share exact data). Some companies have very high sales, but only discount a little, like Fantasy Flight Games. Some companies have medium levels of sales, but discount a lot, like Upper Deck (they still claim no MSRP, so they could argue they don't discount). WOTC only discounts collectible miniatures and only a little bit. Oh yeah, and the missing #10 company that didn't show up on the charts is Educational Insights (makers of Blokus).
Posted by Gary Ray at Saturday, April 19, 2008