I don't like science fiction. There, I said it. It doesn't capture my imagination like fantasy. I've been wanting to start a Warhammer 40,000 (40K) army for a while, but I was waiting for the Daemons, since they were less sci-fi and could be used for Warhammer Fantasy. I've been putting off the decision, but I decided I don't like the models. Going back to square one, I found a single army that captured my imagination.

The Tallaran faction of Imperial Guard are desert raiders. There's very little sci fi here. They're human (check), they don't fly about or use futuristic vehicles (check), in fact they use horses (check with a big smiley face). Other than laser rifles and similar sci-fi accessories, which I'm sorely tempted to replace with AK-47's from Necromunda, there's very little sci-fi here. I wonder if this army exists for this very reason, to attract people to the game who don't like sci fi. My army list looks similar to my army ranger list for Flames of War: A small group of elite troops, lightly armored quick assault cavalry, backed by artillery.

The down side to the Tallaran is that they're hard to come by. The artillery, basilisks, are readily available. All the troops are special order from GW specialist games and the horses aren't even made any more and will have to be procured form the "secondary market," aka Ebay. If I can find some donor models, I'll have them ride camels instead.

Getting Started
I haven't put together a model kit since I was a kid, and it wasn't a hobby I really enjoyed. Several things struck me about the Basilisk as I put it together. First, the date on the sprue was 1994. How many games are still around after 14 years? It's actually pretty amazing.

Second, after spending a lot of time getting the wheels for the treads just right, and then covering them up so you don't even see them, I realized there's a level of detail and obsessiveness about this game that I had missed. 40K players are often portrayed as a bunch of knuckle dragging dice rollers, rather than obsessive craftspeople, carefully assembling models, some of which only they will ever know about. There's a strange pride in knowing the internals of your model is done right and only you will every know it.

Third, the time involved was staggering. After three hours, I had finished step three of nine. Despite this, it added to the satisfaction of completing it (or at least three steps). The bottom line: This is my kind of obsessiveness. 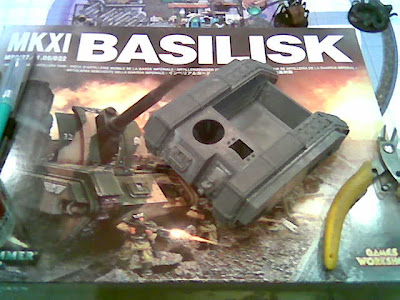