The store kind of feels like that right now. Manufacturers have released a lot of new games for April, like aromatic plates of food outside the dens of sleepy gamers. New releases sit gleaming on the shelves of game stores, waiting to entice the bored gamer with real or imagined tax refunds playing in their heads. Will the gamer come into the store and be enticed by these new games? Will their attention be grabbed enough to get them into something new before the summer break, the true game season? Or will they walk the store, stare right through thousands of dollars of shiny new stuff and ask me, "So, uh, what's new?"

The success rate of groundhog predictions are only around 40%, about the same as the most experienced game industry professional in picking hit games. Like Groundhog Day, one of my favorite movies, the industry gets their chance to do this season over and over again until they get it right. Unfortunately, there's nobody driving that process, so it's hit or miss. 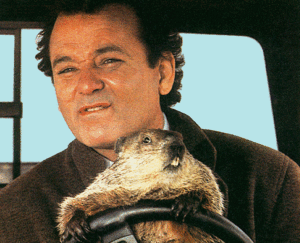