I'm really enjoying my new discovery. Michael's has a bewildering array of props for my game, and my imagination is pretty much the limit. I'm no crafts person, so when I went to the store looking for "modeling clay," I was expecting to find a large gray chunk at best. Michael's instead had three full lines of clay, each in a variety of colors, like we sell paint in the store. I was going to buy some old fashioned clay for my project and paint it black, but instead I found three brands of black clay. I went with black Sculpey III.

Below is a photo of the current prop I'm working on. It's still baking in the oven. It's a black throne for the Cult of the Ebon Hand boss monster in the D&D adventure, Night of Dissolution. This is for the final set piece battle with props I've been working on for about 8 months now. I'll take plenty of photos when it's done. It should be the end battle of my D&D 3.5 campaign. 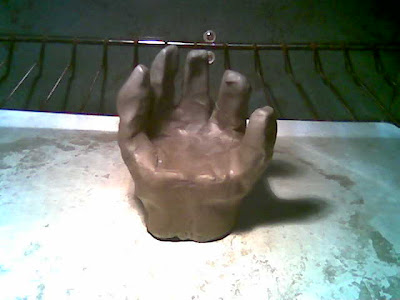