Spoiler Alert: Nobody in my campaign should read this.

This is probably the last set of photos from The Temple of Deep Chaos. The party has explored the entire temple at this point, except for the Kaleidoscope Temple, where they discovered a floating platform and a woman on fire, some sort of priestess. They fought a vicious medusa in plate mail in another section of the complex and they found her here as well, teamed up with the fire priestess. The party rogue takes a quick peek and they retreat to rest. 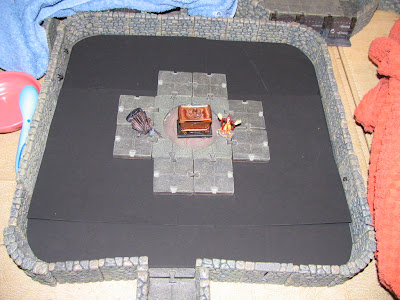 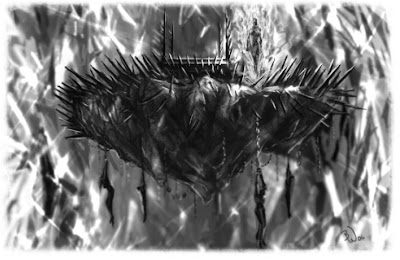 The medusa, on the left in this photo, is now dead. Why? Because of this chamber: 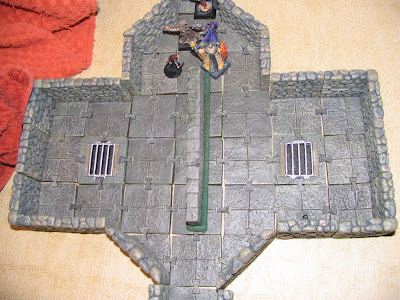 The sorcerer stood on one grate and powerful magic stripped him of his most powerful item, a flaming longsword, the only +2 item the party possesses. Ironically, they stole this from the chaos cultists earlier in the adventure. What did he get for his sacrifice? The party was able to figure out how the sacrifice chamber worked and when the sorcerer stood on the second grate, he marked the medusa for death. The necromantic energy killed her dead, her screaming echoing through the complex. Rather than being horrified, the party was elated and started thinking of other people they could knock off. Combined with their Sword of Iron Crown, a powerful artifact that can (when they're lucky) provide information on anyone in the city, they could deduce the identity of perpetrators and exact vengeance with the sacrifice room.

What the party doesn't know is that only chaos cultists are permitted to use the sacrifice chamber and a powerful necromantic curse has been cast on the sorcerer. The next time he's in a public place, most likely their hangout, The Blue Flame Inn, a burst of negative energy will emerge from him and likely slay all the patrons. This kind of stuff seems to constantly happen to this player, so it should be especially amusing.

So what's next? With a visit to the city and plenty of flying potions, they'll likely attack the Kaleidoscope Temple, and if they survive, move on to the Mrathrack Machine. They've recovered the map to this horrible device and have figured out what the Mrathrack is an Old One. They've been fighting Old Ones, horrible extra-planar demons, for many "real" years now in my various campaigns, so it's perfect that this world could be destroyed by the release of one in a final ritual. Since they know I'm planning my 4E campaign in a different world, they know I'll do it too!
Posted by Gary Ray at Tuesday, April 08, 2008