I'm really excited about D&D 4 and the abandonment of the modular toolkit that made monsters so cookie cutter in 3.x. If the designers want a monster to do something cool in 4E, they just allow them to do it as a special ability. In the past, monsters had to fit the modular design specs, so even the most supernaturally cool powers often felt mechanical and dull. They had to initiate a common physical attack, use common feats or standard spell effects.

There's a new excerpt from the 4E Monster Manual that goes over a couple new devils. My favorite new ability comes from the Succubus. In previous editions she was a demon and not a devil. Demons are about ruthless destruction and carnage and devils are about corruption and seduction. She was always about subtlety and deception, so it made sense to move her to the devil camp. One of her special attacks is called charming kiss.

What's cool is that the effect forces the target to interpose itself in front of an attack, automatically becoming the target. There's no special feat, no game mechanic like grapple, just a slick special ability that works because the designers said so. We have an interesting mechanic associated with failing a save. The old succubus needed a grapple attack (a pain in the butt by itself) to perform a boring kiss that caused energy drain that could be easily removed by common spells. The opponent had to save versus a common Suggestion spell, if kissed. The Suggestion was inevitably avoided by the clever party, who could just ignore the charmed character for the duration. Boring, overly complex and rarely satisfying. This new model is back to basics, back to making monsters frightening and unpredictable. You can just imagine the charmed character struck down by the party as they protect their new love. I can't wait to read more monsters. 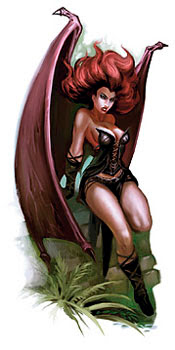