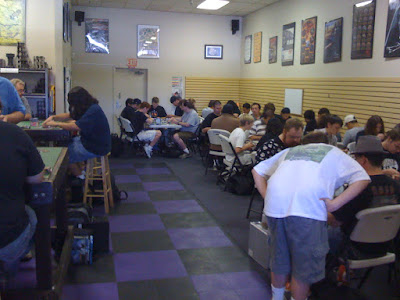 Forty nine is the number of players for the Magic: Shards of Alara pre-release today. It's an odd number, because a) we only had 48 tournament packs, and b) we only had seating for 42.

The tournament pack problem was solved by using 3 boosters and free land for the 49th player. I never knew this but that's all a tournament pack really is, along with a fancy shiny card. The seating issue was creatively solved after one of the players volunteered a card table from his car. We had plenty of chairs, we were just short a table.

So 49 is definitely a phenomenally good number and the biggest event we've had. Now here's the caveat: It's not a successful event yet. The reason is the pre-release restrictions on ancillary sales. We're only allowed to sell product for the event, and not a single booster more. Usually we go through cases of Magic cards during a pre-release weekend, so although sales are really good with those 49 people, they are not up to snuff with a release event weekend. This event will only be a success if the release weekend is also succesful. If the pre-release cannibalizes customers from the release event, resulting in reduced sales, we have a big problem. I don't think that's going to happen, but those are the parameters for success.