Two Weeks with the iPhone G3

Will I return it? Is it a glorified phone? Is it a glorified organizer with telephone functions? I've had the iPhone G3 for two weeks now, including a trip to the Midwest. The phone has actually changed dramatically since I first got it, the biggest change being the software upgrade that improved battery life. It was the major flaw of this phone a week ago, but now it's a distant memory. The second big change was the realization of all the fantastic applications for this, particularly the GPS based ones. The G3 uses cell towers to pinpoint its position, usable for nagivation in a variety of applications.

The GPS functions offer everything you could want, except for turn-by-turn directions, which I've read TomTom is working on. The two most useful GPS apps have been WhereTo, which allows me to find what I want based on categories (a yellow pages), using my location as the basis, and WhitePages, which allows me to search for people or businesses and get maps to them. Want ice cream? We used WhereTo to find the closest Cold Stone Creamery. Want to find Pizzeria Picco in Larkspur? WhitePages is your tool, and we used it this afternoon with its dynamic map showing us where to go. I'm about to download Taxi!, GasBag, Take Me To My Car, iBart, and Emergency Distress Beacon (I have been lost in the woods). I paid $.99 for an app called Compass, because I found myself wanting that feature recently. 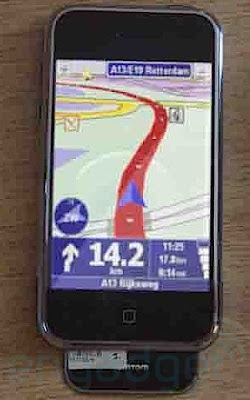 I'm definitely keeping the phone. In fact, I find it to be the most amazing device I've ever owned. It's the equivalent of The Hitchhiker's Guide to the Galaxy, or at least the Internet connected galaxy. Speaking of that connected world, the iPhone is most definitely an urban device. It works fine in major metropolitan areas, but it reverted to a brick of a phone in Wisconsin, lacking support for the more advanced functions from the local AT&T network. So it's not for everyone. It's galactic reach is somewhat limited.

What does it lack? Mostly interoperability with my PC. There's this giant firewall that Apple has created that won,'t allow me to port over MP3 files, AVI files, or run applications that other "smart" phones use, like Microsoft Office (Microsoft is looking at it). Using an iPhone means forever being attached to iTunes and its store. With this closed system, some IT professionals find the iPhone fatally flawed. Still, if you don't mind having other people define the limitations of your device, even really really smart people with very few limitations, the iPhone G3 is an amazing device. The big question is whether I will continue to get $30 worth of value each month out of the iPhone or whether the novelty will wear off. This will require all those advanced features to becomes so ubiquitous in my life, that I can't imagine not using them.
Posted by Gary Ray at Saturday, September 20, 2008