We were carrying the entire line, but over the past few months sales have stalled out with little interest in new releases and few sales of the back list stuff. I've noticed customers who used to buy AT-43 have moved on to other games. I hate to say it, but the few guys who still buy the stuff have a history of backing good games with poor longevity. Sorry folks.

Fantasy Flight Games recently began re-distributing AT-43 in the US, and they fixed some problems such as the poor discount. It's probably too little too late. The discount issue, supply problems, lack of interest in organized play and simplistic rules did it in. I say the rules did it in because it doesn't quite grab the experienced miniature gamer, instead appealing more towards collectible minis players. You don't want to rely on a collectibles base for your livelihood, believe me.

It's time to call this one dead for us and move on. As for the existing stock, my plan is to dump them on eBay and slowly let the stock dwindle (no in-store sale). We can always special order items if you're still playing this game.' 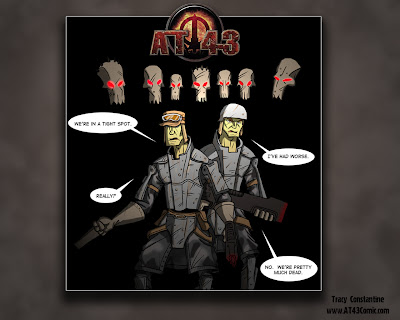