Yesterday my wife called on a borrowed phone to say her cell phone had been stolen at church. This apparently happens a lot, although I don't understand why. The service was suspended within minutes of the theft and the phone itself has a value of next to nothing. I started shopping online for another phone for her, with the intent of going to the local AT&T store to pick it up. Then it occurred to me, we have GSM phones, which are somewhat portable (between people, but not so much between GSM networks in the US), so why is she getting a new phone and not me? I didn't lose my phone. Our two year service agreement was going to end in December, so I already had phones on my mind, but not one in particular. I was hoping to wait until then and shop providers, but the theft changed things.

I started with the holy grail of phones, a tri-band GSM phone. Holy grail? Nowadays a search for such a phone on the AT&T site pulled up 85 different phones. Alright, I narrowed that down to Nokia phones, since I've been using one since 1997 and deviations from Nokia usually resulted in trouble. I've had Ericsson and Siemens a while back and they blew big chunks, with dropped calls and phones that would lock up during charging. Nokia has always been the tried and true. Nokia had cutting edge technology and a simple interface.

The Nokia I selected was a 6555. It was a smart looking phone, with just enough bells and whistles and, like most world phones nowadays, quad GSM, meaning I can use it on vacation around the world (I've got no money, but LOTS of frequent flyer miles). It took photos and video. It was a pleasant new addition. Then I got home and started reading the reviews. Battery life was kinda low, like two hours of talking low. Plus it needed charging on a near daily basis. Oh no. This was going to piss me off to no end, so I quickly boxed it back up and returned to the store, hoping to find a similar phone among the 84 other choices.

It turns out Nokia has fallen on hard times in the US. The US has the most restrictive cell phone operation in the world, with GSM phones locked down to providers. Although you can buy a third-party phone that will work with their GSM network, the provider won't configure it to do anything but make calls. In the old days before a lot of data content, I would order some immensely cool cell phone from Europe and just use the voice features. Who needed incredibly slow, hard to use micro web browsing? Nowadays, there's a lot of content out there that wouldn't be available going that route and it's no longer dog slow.

The rest of the phones at the AT&T store were, well, crap. The top ranked LG phone had a funky interface with tiny buttons. It made me feel like a fat fingered old fart. Other phones had snarky interfaces that were too clever fo their own good, like menus with foliage around them, like I need my cell phone interface camouflaged. Most had confusing, frustrating menu systems. There was one solution left to me, the phone everyone has been talking about for over a year. Resistance was futile. I bought an iPhone 3G.

I am not a techie anymore, really. The iPhone is a small fortune compared to the subsidized, rebate rich phones available from AT&T. My $70 purchase blossomed to over $250, when you included accessories and tax. However, it's a known quantity, a winner, plus it has iPod capabilities. I lost my iPod on the store move. This phone would change my life. I sighed, as I didn't particular want a life changing event, especially with technology.

What threw me wasn't the high price, but the iPhone add-on service plan. $30 a month is an awful lot, especially when I've proudly cut back my expenses over the years. $30 is basic cable, or much faster Internet. Then again, it's four days of soup at the Japanese restaurant next door, so maybe I could brown bag it for the sake of progress. I would be digitally connected ... while eating peanut butter and jelley sandwiches. This was beginning to feel like a cyberpunk novel. I would be the impoverished hero living in the U-Store-It, but with an awesome computer and high speed Internet.

My impressions of the iPhone are that it's not really a phone. Yes, you can talk on its phone functions, but it's really a mobile Internet device. It's an organizer, a driving assistant, a music player, a mobile email platform. It plays videos fantastically well. I wouldn't balk at watching a movie on it. It changes the way you interface with the Internet and adds value (or at least content) to your life when away from a computer. And that is my problem with it.

To spend $30/month, you need to be willing to drink the cool-aid. You need to want to have your life changed by technology. It's not like the features of a regular cell phone that you can safely ignore. You're paying for this access, so you need to justify using it. I'm no Luddite, but I think I was doing just fine without it. Then again, how often have you been in the car and wished you had printed out a map? Or maybe came to the end of the road with a "turn left on unnamed road" instruction. How about looking up flight information? Then there's the data content, including a couple gigabytes of gaming podcasts, every photo taken on my digital camera, and a cool merging of contact information from my old phone and my email account. Oh, and did I mention it's got something like 6 or 7 bands of GSM? How worldly is that? Pretty slick. Of course the battery life is just as bad as the Nokia. I've got 30 days to decide. 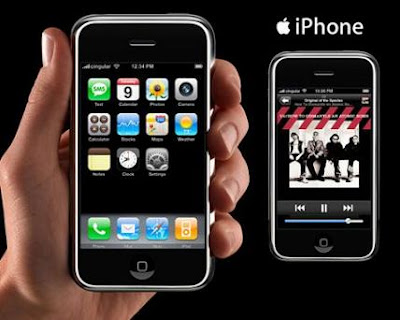